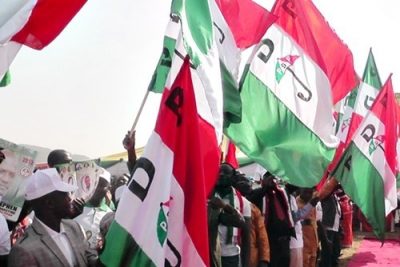 THE Peoples Democratic Party has called on the Independent National Electoral Commission to consider postponing the governorship election in Anambra State if the increasing level of insecurity in the state cannot be contained.

The state Secretary of the party, Mr Chukwuebuka Okoli-Akirika, who made this call while speaking in a telephone interview with The PUNCH on Wednesday, said though the election was expected to hold, it was impossible to conduct such exercise where gunmen shoot at any person on sight.

Explaining that only the living can be part of the governorship poll, Okoli-Akirika specifically stated that the Federal Government should not wait till the day of the election to contain the killings and destruction going on in the state.

He said, “The election will hold, but if the issue of insecurity becomes more pervasive and uncontrollable, what the government should do is to postpone the election.

“I have always said that elections are for the living and not for the dead. Government must not wait till that day (November 6, 2021) before they can ensure security of lives and property.

“If INEC could postpone presidential election because of inadequate preparation; in Anambra State, we have a case of clear and present danger, what the government should do is to think of postponing that election. After that, the government can contain the security situation and attend to the reason for the insecurity.”

Okoli-Akirika, who is a legal practitioner, however, attributed the insecurity in Anambra State and the entire South-East to injustice against Ndigbo, adding that there should be a change of attitude to ensure the people of the zone did not continue to feel cheated and alienated.

He said, “Ndigbo are not properly treated; we are being marginalised and treated as second class citizens. All these are causing the violence, and the governors are not helping matters.

“They were shouting that Nnamdi Kanu was avoiding trial, but it has been almost two months since they arrested Nnamdi Kanu and they don’t want to arraign him. So, that is not good.”

No One Has Monopoly Of Leading Nigeria – Tambuwal

I’ll run for president if God, Nigerians say I should, says…

Ayu’s emergence as chair: North gets PDP’s nod to contest…