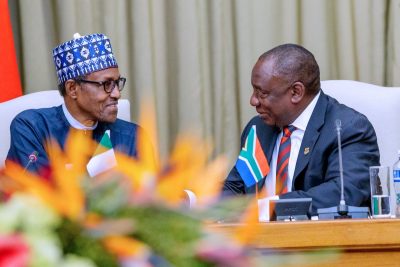 Barring any last-minute change, President Muhammadu Buhari will be receiving an August visitor in November. South Africa’s president, Cyril Ramaphosa, in the company of top government functionaries of his administration, is scheduled to undertake a three-day visit to Nigeria between November 29 and December 1.

The visit, which is more than long overdue, will be President Ramaphosa’s first visit to Nigeria in his official capacity as the substantive president of the Republic of South Africa since he was elected some three years ago. When he had visited Nigeria in 2018, this was as the acting president, following the exit of former President Jacob Zuma from office.

President Ramaphosa’s coming is a state visit which, in diplomatic circles, is different from an official visit. In the diplomatic world, a state visit is a formal visit by the head of state of one country to the head of state of another country. It is the highest level of bilateral relations, and its purpose is to confirm the good relationship between the countries concerned and to explore ways of making it even better. It is different from an official visit, which is one made by a functionary of a sovereign government, for instance, a minister, to another country based on the invitation of his counterpart serving in the same capacity as the inviting country. In other words, a state visit can only be undertaken by a sovereign head of state to another sovereign head of state.

Clarifications over, it is pertinent to state that South Africa has had a chequered history, especially as it relates to the years of apartheid rule. During this period, black South Africans were subjugated and suppressed by their white counterparts who felt that they were superior to them and, therefore, deserved to dominate them. The significant contributions made by Nigeria in helping to put an end to apartheid is well documented.

Besides Nigeria providing material and human resources to help fight white domination in South Africa during the dark era of apartheid, Nigeria also provided some sort of shield for some of the leading lights of the anti-apartheid struggle, such as Thabo Mbeki (who was to later become president of South Africa), when they were declared wanted in South Africa. Though far away geographically from the frontline of the fight against apartheid, Nigeria was symbolically seen as a frontline state and played a crucial role in the struggle that led to the end of the obnoxious regime.

Since the end of apartheid and the institution of majority rule, Nigeria and South Africa have had a very harmonious relationship. Except for occasional disturbances often triggered by xenophobia which targets Nigerians based in South Africa and their businesses, the two countries have developed many positive partnerships along the way. However, there is still a lot to be done in promoting bilateral cooperation between the two countries. This is especially so taking into cognizance the influential roles the two countries have to play in helping the African continent to actualise its manifest destiny in the world.

Two critically important things the leadership of the two countries must bear in mind are that one out of every four Africans must be a Nigerian because the country remains the most populous in Africa, while South Africa, warts and all, remains the strongest economy on the continent. This places a responsibility on both countries to leverage the comparative advantages inherent in them for the prosperity of Africa and the advancement of the black race. It is said that South Africa and Nigeria – Africa’s largest economies- account for about a third of the continent’s output. This reality must be put to work for the benefit of all Africans.

One hoped-for outcome of Ramaphosa’s visit is that the South African government will accord Nigerian businesses operating in the country (South Africa) more freedom to thrive. The urgency to strengthen bilateral cooperation between the two countries can no longer be delayed or postponed, going forward.

Currently, the official encumbrances confronting some legitimate Nigerian business operators in South Africa preclude them from doing as well as they should do. The Nigerian spirit is a resilient one, capable of overcoming challenges. But it will serve the benefit of all sides when official encumbrances are removed. This is especially so given the growing population of Nigerians in South Africa. According to some official data, there are about half a million Nigerians living in South Africa. That’s almost the population of Sao Tome and Principe! These are economic immigrants that, individually and collectively, contribute and will continue to contribute to the growth and development of their host country.

Interestingly, South African business concerns in Nigeria are doing very well, creating value and employment for Nigerians while also generating revenue in the form of diaspora remittances back to South Africa. One of these is the telecommunication giant, MTN, which is the largest telecommunication provider in Nigeria. Another is DSTV whose parent company, Multichoice, remains the number one leading player in the cable TV ecosystem in the country. Nigerians are arguably the biggest users of the satellite TV network aside from South Africans who own the network!

Altogether there are about 120 South African firms doing exceedingly well in the Nigerian market in diverse sectors like telecommunications, banking, retail and fast food. Conversely, only a few Nigerian firms like Aliko Dangote’s Sephaku Cement and Oando Energy company are operating in South Africa. This gross imbalance has to be corrected through the elimination of official barriers preventing Nigerian firms from operating in the country.

Another area where both leaders need to find common ground is with the visa regime between both countries. Right now, the process is unseemly, unwieldy and inimical to good relations between the peoples of both countries. It speaks volumes that it is much easier for a Nigerian, irrespective of status or travel history, to get a visa to visit the US, Britain and several European countries than it is to obtain one to visit South Africa. This painful reality, which inhibits business relationships between both countries, needs to come to an end.

It is to be hoped that after this August visit, Nigeria and South Africa will adopt the Nigeria-Kenya visa-on-arrival policy which has been a fundamental catalyst in improving the ease of doing business between the two countries. If Kenya and Nigeria could do it, then nothing should stop Nigeria and South Africa from doing the same thing. It is settled that business operators and owners will most likely invest in a country where the issue of visa acquisition does not pose a big challenge.

The visa-on-arrival policy undoubtedly will help to accelerate the free entry and exit of genuine businesses – people and capital – between the two leading African countries. This will automatically expand the volume of trade between the two countries. In the spirit of the African Continental Free Trade Area (AFCTA), which is essentially about promoting intra-African trade, there is the need for Nigeria and South Africa to collaborate in the areas of trade and other shared interests. Changing the current visa policy strengthen bilateral cooperation between the two countries.

Contiguous to the visa-on-arrival policy is the urgent need for South Africa and Nigeria to, without delay, make export two-way traffic between the two countries. That is, Nigeria should export to South Africa what the latter needs and vice-versa. Given the closeness and nearness of the two countries to each other, it does not make any economic sense and is contrary to the ideals of pan-Africanism for either South Africa or Nigeria to import from Europe, China or any other Asian or American country what they can easily get from each other. There is a lot for the two countries to benefit from each other if the mechanics can be officially put in place and implemented.

Furthermore, the Nigeria-South Africa Binational Commission needs a radical rejig for it to properly play its role and achieve the objectives for which it was set up. Established in 1999 to facilitate bilateral cooperation between the two countries, more than two decades after, the commission has not fully actualised its mandate. Given the occasional diplomatic impasse between Nigeria and South Africa and, by extension, the unfair way Nigerians are being treated whenever there’s a xenophobic attack in South Africa, it is quite clear that the commission has a lot of work to do in order to fulfil its mission of growing and strengthening the relationship between both countries.

Going forward, there is the need to incorporate the organized private sector (OPS), Manufacturers Association of Nigeria(MAN), the National Association of Chambers of Commerce (NACCIMA) and similar institutions into the South Africa-Nigeria Binational Commission for institutional strengthening. The aforementioned are the key drivers and players in Nigeria’s economy. By incorporating them into the commission, they will easily point out grey areas that need to be ironed out between the two countries and help in finding ways to implement them.

All told, Nigeria and South Africa must collaborate for the mutual benefits of the two countries in particular, and the advancement of Africa in general. There is no better time to activate the collaboration than now. The success of President Ramaphosa’s state visit to Nigeria will be measured on this.

2023 election: The north is indispensable