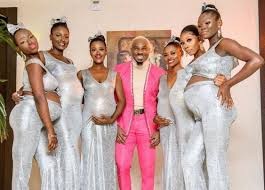 The controversial club owner referred to the women as his “6 baby mothers to be”.

This isn’t his first time Pretty Mike is being controversial while attending an event. He was once called in for questioning after he attended an event accompanied by a number of women on dog leashes. Also, in 2019, he attended an event with four dwarfs carrying a calabash.

However, many people were not surprised by his entourage of pregnant women, cause the Lagos. socialite always makes a controversial and grand entrance while attending an event.

Watch video of him and his entourage of pregnant women below: