Prove to me Norwich thrashing is not a one – off, Tuchel tells Players 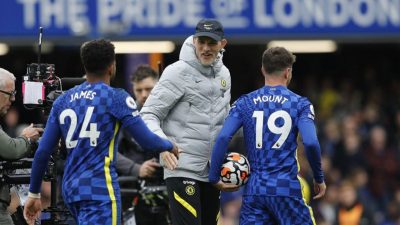 Shorn of the injured Romelu Lukaku and Timo Werner, Chelsea made light work of lowly Norwich at Stamford Bridge, with Mason Mount scoring a hat-trick in a 7-0 win.

Mount opened and rounded off the scoring, with strikes from Callum Hudson-Odoi, Reece James, Ben Chilwell and an own goal from Max Aarons wedged in between.

Chelsea’s win lifted them four points clear at the top for at least a few hours, and though pleased with the display, Tuchel wants the same level of performance when the Blues take on Southampton in the EFL Cup on Tuesday.

He told BT Sport: “Yes, a good performance, we were sharp, put in a lot of effort.

“High-pressing, [we] played a high rhythm and created a lot of chances and we were very precise. It was a deserved win. To score seven you need a bit of luck and momentum, but a good game.

“This will not stop, this is only one game and the next one follows on Tuesday here, up for a challenge again and they will have to prove it again. All the credit, but it’s only one game.”

Mount had not scored since netting in a 2-0 Champions League win over Real Madrid in May, but he was the star of the show against the hapless Canaries, who also had Ben Gibson sent off.

He had more shots (five) and efforts on target (four) than any other player, while his tally of three key passes trailed only Mateo Kovacic (six).

Tuchel said: “It’s good, because no matter what the coach says and how many good opportunities you have, how satisfied the coach is, the offensive guys need goals to feel fully happy, full confidence.

“He waited long, too long, and it was good that he got some goals today.”