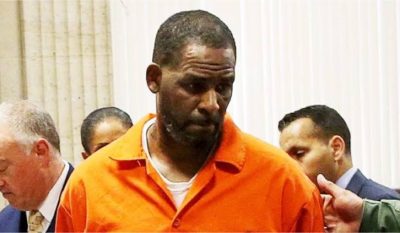 Disgraced singer R. Kelly may be ordered to pay over 300,000 U.S. dollars to one of the victims of his elaborate scheme to sexually exploit young aspiring singers and underage children.

A restitution order by U. S. District Judge Ann Connelly, which was still being finalised, is intended to cover the cost of treatment for the individual’s herpes and psychotherapy.

The victim, who remains anonymous, has accused the singer of giving her the sexually transmitted disease during one of their encounters.

Kelly was sentenced to 30 years in prison in June, after being convicted on multiple counts of racketeering, relating to bribery and forced labour, by a jury in 2021.

Earlier this month he was also convicted of several child pornography and sex abuse charges in his hometown of Chicago.

But the jury acquitted him on a fourth pornography count as well as a conspiracy to obstruct justice charge accusing him of fixing his state child pornography trial in 2008.

He appeared at a hearing at a federal court in Brooklyn via videolink from prison in Chicago.

At his sentencing Kelly was branded “the pied piper of R&B” as he came face to face with several of his victims who detailed his “deplorable and inexplicable” abuse, which took place over decades.