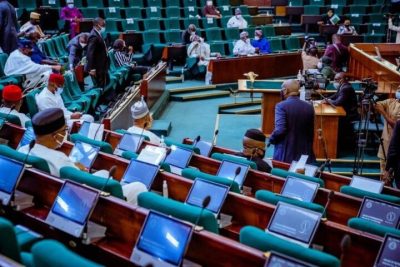 A motion seeking a review of the salaries of judicial officers suffered a setback at the house of representatives on Thursday.

Onofiok luke, lawmaker from Akwa Ibom and sponsor of the motion, had requested that the house ask the Revenue Mobilisation Allocation and Fiscal Commission (RMAFC) to “upwardly review the remuneration of judicial officers in line with present economic realities”.

While moving his motion, Luke drew the attention of his colleagues to the recent letter written by 14 justices of the supreme court accusing Ibrahim Muhammad, chief justice of Nigeria, of abandoning his responsibilities as the leader of the court.

Luke said the issues raised by the justices threaten their performance and can cause delays in justice delivery “with its attendant effect on the maintenance of law and order in the country”.

“The remuneration of judicial officers was last reviewed in 2008 by the RMAFC when the official exchange rate was N117.74 to $1, whereas the naira has considerably depreciated,” he said.

But debates by lawmakers forced him to step down the motion for “further consultation”.

In his debate, Idris Wase, the deputy speaker of the house, called for the review of the salaries of public officers who fall under the “scheduled bodies” of RMAFC.

He said the salaries of judicial officers should not be reviewed in isolation.

“I think this particular element does not affect just judicial officers,” he said.

“My amendments will be that the RMAFC reviews and look into the entirety of those scheduled bodies under their supervision. They have the responsibility to review their salaries. That is my amendment.”

The RMAFC is empowered to determine the remuneration appropriate for political office holders, including the president, vice-president, governor, deputy governors, ministers, commissioners, special advisers, legislators, among others.

While rephrasing Wase’s amendment, Femi Gbajabiamila, speaker of the house who presided over the session, said “the DSP’s amendment is that we should not isolate the judiciary. All those enumerated constitutional bodies and public office holders should be reviewed”.

Luke, who was visibly dissatisfied with the amendment, said while he agrees with the decision of the house on Wase’s amendment, “there is a danger in that”.

“Now, the danger is that the regulation or legislation dealing with the remuneration of the judicial officers is tied with the remuneration of political office holders. Any attempt by us now to begin to push an agenda for our own review would be seen as politicians wanting to increase their salaries, which would have covered what we are seeking to do, which is asking for the increase of salaries of judicial offices.”

Luke, who is the judiciary committee chairman, advised his colleagues to pass the original motion without the proposal of the deputy speaker.

“We must rise as legislators to speak for them and find a way until when we have had an amendment to the certain political, public and judicial office holders (Salaries and Allowances) Act. That is why we have been asking for splitting of it.”

But Wase disagreed, saying he was “taken aback” by Luke’s recommendation.

“This is an attempt to improve the system and remuneration is one element,” he said.

While the back and forth between Wase and Luke was yet to be put to rest, Tahir Monguno, the house’s chief whip proposed another amendment, demanding a review of the national minimum wage.

Subsequently, Gbajabiamila asked if Luke would step down the motion “for further consultations” and reintroduce it next week.

Luke agreed and the motion was stepped down.
(The Cable)