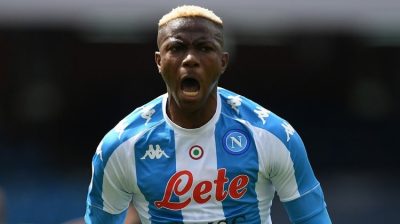 French Ligue 1 club, Lille, made a huge profit of €47.6m with the sale of Victor Osimhen to Napoli in 2020, PUNCH Sports Extra reports.

Osimhen, who joined the Partenopei for a club-record fee of €70m plus €10m in bonuses, is the only Nigerian player on the list of the biggest transfer profits on a global level in the last 12 months, according to Transfermarkt.

He is ranked in 30th place.

In Africa, only Manchester City winger Riyad Mahrez, Arsenal’s Nicolas Pépé and Pierre-Emerick Aubameyang have earned more profits for their respective European teams than the Nigerian.

Paris Saint Germain star Neymar tops the list of players with the biggest transfer profits with the sum of €133m with his compatriot Philippe Coutinho in second place with €122m. French star Ousmane Dembélé is third on the list with €100m with Gareth Bale (€86m) and Eden Hazard (€80m) making the top five.

Over two-thirds of English Premier League players vaccinated against coronavirus