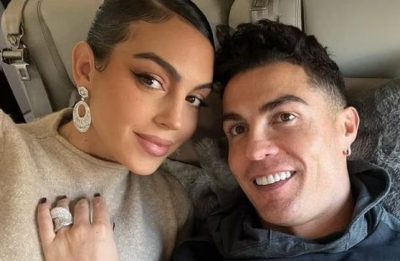 Cristiano Ronaldo’s fiancée Georgina Rodriguez has admitted she found it tough getting accustomed to the footballer’s lavish lifestyle.

The influencer, 27 – who has 29.7million Instagram followers and is set to star in her own Netflix documentary I Am Georgina when it debuts on her 28th birthday this Thursday – had to get used to being picked up from work by Cristiano, 36, in one of his expensive supercars after getting the bus there in the morning.

And she even got lost in his huge £4.8m home a number of times after they first met, claiming it took her half an hour to return from the kitchen after getting a glass of water.

According to The Sun, she said of their early days together when Cristiano picked her up from her Gucci sales assistant job in Madrid: ‘I’d get there on the bus and leave in a Bugatti.

‘I went from selling luxury items to wearing them on the red carpet. I have millions of followers and I’m the woman of the most-followed man in the world.’

She went on to recall the time she got lost at Ronaldo’s extensive Spanish pile, saying she struggled with the size of his property after growing up in a more humble abode.

‘Sometimes it would take me half an hour to get back from the living room because I didn’t know the way. It was so big. Since I was a kid, I’d been used to living in small apartments.

‘After half a year, I got to know where everything was.’

It comes after Georgina’s uncle branded her ‘the most evil woman’ and claimed she has ‘forgotten about her family’ since meeting fiancé Cristiano.

Slamming the internet sensation – who he helped raise after her father was jailed – Jesus Hernandez revealed ‘she has only rang once or twice since I found out she was dating Ronaldo’.

He added to The Sun: ‘She may feel ashamed of us and consider she’s better than us because we don’t live with her luxury. I’ve never asked her for anything. She has only rung once or twice since I found out she was dating Ronaldo.’

Jesus was tasked with ‘providing for Georgina and her sister’ after their father Jorge smuggled £100,000 worth of cocaine from Spain when Georgina was just four years old.

He said: ‘I was in charge of providing for Georgina and her sister, buying them clothes, paying for their electricity and water.

‘I did everything. Georgina was living with me during her teenage years until the day they sent my brother-in-law back to Argentina.’

Jesus told The Sun: ‘She may feel ashamed of us and consider she’s better than us because we don’t live with her luxury. I’ve never asked her for anything’

He also alleged Georgina lived with him until she was a teenager and refused to tell him where brother-in-law Jorge is buried following his death three years ago.

Jesus – who resides in Spain in a two-bedroom home and earns £650 per month – detailed a comment he left on Cristiano’s Facebook that read: ‘You’ve got the most evil woman at your side.’

And he is not the only one who claims to be angered by Georgina’s alleged behaviour.

According to the paper, her half-sister Patricia Rodriguez claimed Georgina refused to ask Cristiano, 36, for an autograph for her son as the superstar footballer – who is worth an estimated £790million – ‘was on holiday’.

Elsewhere, the outlet added that her grandmother Juana Escarabajal died of heart failure before Georgina introduced her to her and Cristiano’s four-year-old daughter Alana Martina.