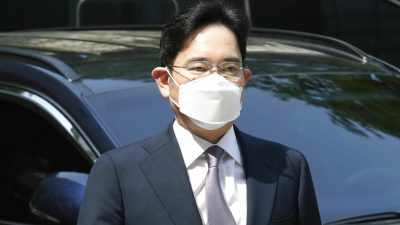 A court in Seoul on Tuesday handed down a fine of 60,000 dollars (70 million won) against Samsung Group heir Lee Jae Yong.

Lee was fined for illegal use of an anesthetic medication over a period of years, South Korea’s Yonhap news agency reported.

The illegal substance is said to be the anesthetic propofol.

Lee is said to have been administered the narcotic drug, which is illegal in South Korea, over 40 times between 2015 and 2020.

In June, prosecutors indicted the Samsung Electronics vice chairman on charges of taking propofol for purposes other than medical treatments at a plastic surgery clinic.

He was sentenced to two and a half years in prison by the Seoul High Court on Jan. 18 in a retrial of a bribery case involving former South Korean President Park Geun-Hye.

Lee was released on parole in August.

The 53-year-old has largely withdrawn from public life since then.