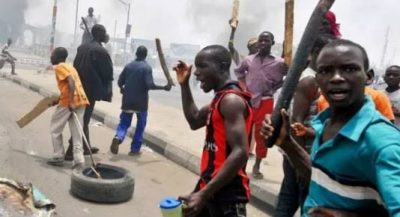 HOODLUMS are taking over the Southern states, laying waste to lives and property with reckless abandon while security agents sit by lamely. In the form of gang wars, street fights and secret cult attacks, they create tension and terror among people. Exploiting that lacuna, they loot property, vandalise vehicles, collect tributes, and kill with impunity.

Variously described as cult war or supremacy contests, the noxious menace reared its head on Lagos Island at the weekend. At the end of the open warfare, two persons lost their lives: three on Friday; the fourth was hacked to death the following day. The war arose from a contest for turf between the supporters of two National Union of Road Transport Workers factions. This is a failure of governance. Instead of vigorous law enforcement, Gbenga Oyerinde, the Special Adviser to Governor Babajide Sanwo-Olu on Central Business District, reportedly appealed to the union to desist from destruction.

Government’s tolerance for crime features highly in the violence as seen in a recent case in Ebute Meta, Lagos, where two rival gangs engaged in a free-for-all that resulted in the death of two persons. The chief security officer of the Lagos Mainland Local Government Area, Ishola Agbodemu, reportedly spoke to the leaders of the groups before the fight and asked them to call off the skirmish. The factional leaders were also invited for a meeting at the Iponri Police Station after the mayhem. In essence, those behind these mindless bloodlettings are not only known faces, they are members of the community where they operate. It is most unfortunate that security agencies and state officials are treating criminals to phone calls and meetings. Such craven behaviour has emboldened criminals in Lagos.

The road transport unions, in a bid to seize power and exert control over their counterparts, have morphed into deadly secret cults. Many street fights in different parts of the South-West are connected to this power tussle.

Another part of Lagos that has become a hotbed of frequent clashes between hoodlums and cult groups is Ikorodu. There is hardly any week that passes without a report of a brutal clash resulting in killings by rival cults. In October 2021, the ‘Eiye’ and ‘Aiye’ cultists in Owode and Ibeshe communities, Ikorodu, held residents hostage for one full month. No fewer than three people were killed. Though the police always claim to have made arrests, prosecutions are few.

But Lagos is not the only place in the South-West known as the haven of hoodlums. Early in 2022, one person was killed when two gangs clashed in Igboora, Ibarapa Central Local Government Area of Oyo State. On January 10, the refusal of a trader in Ikire, Osun State, to give money to some hoodlums because she had already paid another group, led to a clash between the two groups, resulting in the death of one person. The woman’s shop was not spared.

This impunity is a result of lack of deterrence. As the general election inches closer, this trend is a serious threat that must be tackled headlong. South-West state governments must stop treating these criminals as untouchables. They must be arrested and prosecuted to the full extent of the law. Lagos State in December 2021 passed the Anti-Cultism Bill, which was signed by Sanwo-Olu, into law. That law, among other things, stipulates 21 years for cultism or involvement in actions that could endanger the lives of residents. If this law is enforced, the hoodlums will think twice before committing crime.

The state governments should particularly consider passing a law like the anti-terrorism law that will allow the government or security agents to identify and designate these criminal gangs and cults as terrorist organisations, so that mere membership becomes an offence. This can be done periodically with the names and labels constantly updated.

It is important that public officers stop fraternising with questionable characters who lend themselves as willing tools of violence. Ahead of elections, desperate politicians form dark and dirty dalliance with criminal gangs. Some arm them with weapons and fake police and military uniforms. After elections, the thugs become uncontrollable, emboldened to commit all sorts of crimes. This way, criminal gangs have become intractable in different parts of the country. The state governments must prove that they are not complicit in this problem by dealing decisively with these thugs and their sponsors.

As part of measures to check this menace, state governments should form special squads against cultism and hoodlums. The primary duty of the squad is to liaise with community leaders to identify these gang members. The Lagos neighbourhood security watch should work with the police in ending this menace of open warfare in broad daylight.

The NURTW, especially, has become a blood-stained nuisance, harassing hard-working drivers and motorists. Covertly backed by unscrupulous politicians, including some holding public offices, the union has made thuggery and hooliganism attractive in the South-West, promoting gang wars and street fights. Openly, they run protection rackets, turn garages and bus stops to drug-dealing and smoking joints and from there, engage in traffic robbery and rape. Many Nigerians have lost their lives and property in the process; the culprits are hardly ever brought to book. This cannot continue.

Criminals must be held accountable and made to face the full wrath of the law. Where it is hard for hard evidence to be established for their involvement in such mayhem, they should be charged with lesser offences.

This problem is not new, but it has lingered due to a lack of political will to eradicate it. If the core responsibility of government is the protection of lives and property, the mere existence of these gangs is not only an indication of a failed society, but it also reflects failed governance. Government must not spare efforts or resources in crushing them. The lawlessness and brigandage of the road transport unions, who have obviously infiltrated the political system, must be curbed.