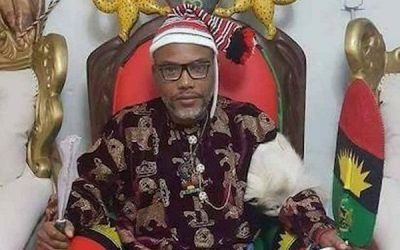 It was gathered that the weapons seized during the violent attacks were being amassed in preparation for an imminent declaration of separation from Nigeria by IPOB and its Cameroonian ally.

One of the sources said the collaboration between IPOB and its ally explained the increase in attacks against security agents in the Akwa Ibom and Cross River State axis, especially in  Bakassi area, which serves as an access to the southern part of Cameroon on water.

It was gathered that the reason for the increased attacks along these areas was to whittle down security presence on the Nigerian side to enable IPOB move arms and allow its fighters travel more freely.

The intelligence community projects an increase in the spate of attacks in both geo-political zones.

The sources revealed that within the past week, about 100 members of the Eastern Security Network (ESN), the combatant wing of IPOB, had moved to Cameroon to acquire training in arms handling.

A second batch, it was gathered, is getting ready to be dispatched soon also.

Another source said the narrative of Fulani herdsmen attacks in the Southeast was invented  to distract attention from the real situation in the zone.

The source dismissed allegation by IPOB that the Department of State Security (DSS) was plotting to attack banks and blame it on its members as untrue, ridiculous, childish and illogical.

Spokesman of IPOB, Emma Powerful, had said the plot was meant to tarnish the image of the group’s militant wing, Eastern Security Network (ESN), before the world.

On Thursday, IPOB leader Nnamdi Kanu said the ESN had no plans to attack banks in the Southeast.

He denied the claim that the money to be realised from the operation would be used to purchase arms. He said they (IPOB) did not need the money as they could produce their own arms.

Shortly after the denial, a bank was attacked in Abagana in Anambra State by unknown gunmen, who hoisted Biafra flags.

Sources said the group’s mode of operation is to raise false alarm and carry out such attacks in a bid to blackmail security agencies.

“It is not true and it cannot be true. So what they have done is that hours after they issued that alarm, they attacked a bank in Abagana, Dunukofia LGA, Anambra State,” one of the sources said.

Continuing, the source said: “If they are peaceful as they try to portray themselves, why the need for weapons?

“You claim you are non-violent, yet you admit you are making weapons. What are the weapons for?

“Their main aim in all these attacks is to get secession, working with a group fighting for Ambazonia Republic in the Republic of Cameroon.

“The narrative of the Fulani herdsmen is meant to serve as a distraction from the major issue. What is actually happening is a secessionist fight that is building. The Fulani issue is just a fringe issue.

“You can see the recent upsurge in the attacks against security agents in the South East and along the Cross River State and Akwa Ibom axis. This is the reason they are attacking checkpoints in the Southeast so that stop and search would no longer be effective.

“They want to dismantle the security apparatus in the Southeast and South-south so they can have a leeway to transfer arms in the area between themselves. The waterways of Cross River and Akwa Ibom and the closeness to ‘Ambazonia’ make it strategic for them.

“There is no responsible government that would stand idle and not do anything while dissident groups build and try to subvert peace. They have already set up training camps in Delta and parts of Imo State.

“They are still planning a bigger fight against constituted authority and against the sovereignty of the country. They feel they need a strong armoury to drive their success, which is why they are sourcing for arms.

“As I said, they are working with other secessionist groups especially ‘Ambozonia’ and they do exchange in terms of training and arms. They want to clear all the security hurdles along the internal superhighway to Cameroon, especially along the Anambra, Ebonyi and Enugu axis.

“The highway from Lagos goes through Edo and Delta States and connects Anambra, Enugu, Ebonyi and then Cross River into Cameroon.

“What they want is that once they dismantle the security agents, they would be free to operate. Attacking banks is to get money, create fear, destabilize the economy, stamp their authority as a subversive and insurgent group.

“All these sum up the reason they have the terrorism tag. The aim is to achieve political gain which in this case is secession and having their own republic.

“They try to show their authority by confronting principal officers of government. Then they seize arms and seek to command spheres of influence, and command the loyalty of the local population. They consistently attack government infrastructure to create the impression that the government looks weak and so the populace would see the government as weak.

“In a bid to drive this agenda, they adopt fake news, hate speech, propaganda, disinformation and misinformation to create narratives that suit their political plans and whip up sentiments.

“They sell the impression that the Southeast is full of Hausa Fulani security agents who are sent to protect the herdsmen. Most of their reasons are puerile. The root cause of all these problems is the struggle for secession, but they would advance reasons such as nepotism, marginalization, etc.”

I am the leader of Tijjaniya – Muhammadu Sanusi

Why Are Governors Afraid of Judicial Autonomy?