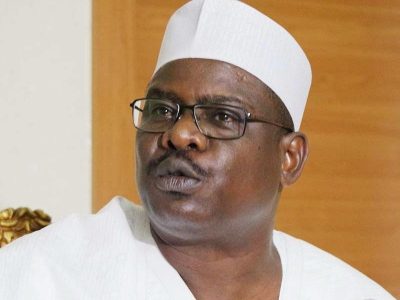 Senator Mohammed Ndume Ali and Chairman Senate Committee on Army on Friday denied media reports (not in Vanguard) claiming that dozens of Police Officers were kidnapped by Boko Haram members who invaded Limankara village and some parts of Gwoza Local Government Area of Borno State, including the Police Mobile Training School which was deserted some year ago.

Ndume who hail from Gwoza and representing Borno South Senatorial District made the denial in an exclusive interview with our Correspondent in Maiduguri on Friday.

He said that, Limankara community and other surrounding villages are calm and peaceful with Military Battalion stationed at strategic places who have been crushing fleeing Boko Haram insurgents crossing from Sambisa forest to the Mandara mountains of Cameroun on daily basis.

“It is not true that some police officers were kidnapped in Limankara, Infact, there are no policemen in Limankara, we only have Military troops/Battalion in Limankara who are up and doing, and there is no attack of such nature”.

I Will Not Pay A Dime For My Kidnapped Commissioner’s…