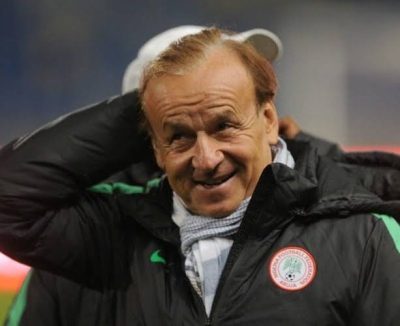 The Minister of Sports Sunday Dare has handed down the directives of the Presidency that the Super Eagles Manager Gernot Rohr should be relieved of his position forthwith.

Our correspondent learnt that the presidency gave the order over the weekend and want everything surrounding the disengagement of the German sorted out immediately.

“The presidency is aware of the poor performance of Rohr and wants to align itself with the yearnings of Nigerians who want the coach sacked.

The minister has handed down the directives of the presidency to the NFF and in the coming days the coach should have kissed his job goodbye,” a source Meanwhile, the NFF has continued negotiation with the coach’s representatives and talks will likely be concluded on Tuesday.

Our correspondent learnt that the NFF is pushing for a mutual agreement which will lead to the amicable termination of the contract and securing of soft landing on the issue of the $2million severance fee clauses in the coach’s.

“They also disagreed with the proposal that the salary arrears of their client including the severance package be paid instrumentally, preferring to have it deducted from the annual subvention from the world football governing body FIFA instead.

They have even threatened to report the case to FIFA alleging undue pressure on their clients to forcefully accept unfavourable terms. Although Rohr has agreed to step down from his role as Eagles coach, the two parties are scheduled to meet on Tuesday and hopefully reach an agreement after which the official announcement of his sacking will be made.”