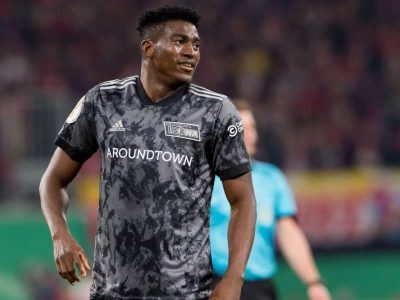 Super Eagles striker Taiwo Awoniyi has further achieved a milestone in his fledgling career after rounding off a first degree programme at the Buckinghamshire New University in the United Kingdom.

The 24-year-old recently completed a dream move to newly promoted English Premier league side Nottingham Forest in a reported club record’s transfer fee of £17 million, said he was happy to have been able to marry education with his demanding career as a footballer.

A holder of a Diploma in Business Administration and Marketing Management, Awoniyi joins an exclusive list of Nigerian footballers with a university degree education including his mentor Seyi Olofinjana who was a Chemical Engineering undergraduate at Ladoke Akintola University of Technology (LAUTECH) in Ogbomoso, during his heyday.

“ Of course, I’m doing other stuff on the sidelines, “ the amiable Awoniyi told newsmen during the week.“ I got my Diploma in Business and Marketing Management two years ago from London school of International Business.

“ I’m happy to also inform you that I’ve just finished a degree programme in Business Management at Buckinghamshire New University and my graduation is next month,” he added.

It was further gathered that the University will be holding its Graduation Week between September 5 and 9 at Wycombe Swan Theatre in High Wycombe.

Awoniyi joins an impressive list of sports and entertainment celebrities that have passed through the 131-year-year old university famous for its motto ‘Arte et industria’ which translates to mean ‘Art and Industry’ in English.

Meanwhile, Awoniyi has spoken exclusively to The Nation about his expectations with Nottingham Forest as he makes his long-awaited debut in the Premier League as the 2022/23 season gets underway this weekend.