Tambuwal named interim chair of NGF as Fayemi bows out 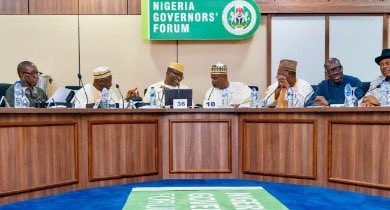 Aminu Tambuwal, governor of Sokoto, is now the interim chairman of the Nigeria Governors’ Forum (NGF).

The development was announced on Thursday at the meeting of the (NEC), which held at the Aso Rock villa in Abuja.

Tambuwal takes over from Kayode Fayemi, governor of Ekiti, who has served as chairman of the NGF since he was sworn in .

According to a statement by Abdulrazaque Bello-Barkindo, NGF director of media and public affairs, Tambuwal, who was the vice-chairman of the NGF, will serve as interim chairman of the forum until an election by the governors in May 2023.

Speaking at the NEC meeting, which he attended virtually as he is currently at the United Nations general assembly (UNGA) in New York, the Ekiti governor commended the council for its efforts and also expressed appreciation to his colleagues for their support.

“Yes, we may be occasionally troublesome, coming from the Forum of Governors, and we do test your patience, but you have never really expressed any frustration with all our truculent questions and the insistence that the federation must be a true federation,” he was quoted as saying.

He also thanked President Muhammadu Buhari for working with the NEC on its resolutions through implementation.

In his remarks, Vice-President Yemi Osinbajo commended Fayemi for his “informed and patriotic services to the council in the last four years”.

A formal handover has been scheduled for October 16.

Meanwhile, as the president of the forum of governors of regions/states of Africa.

Why we can’t implement pay-per-view for DStv, GOtv – Multichoice