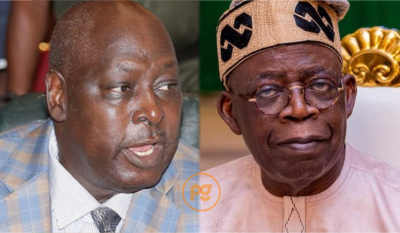 Babachir Lawal, a chieftain of the All Progressives Congress (APC) and former Secretary to the Government of the Federation, has revealed the disdain his party’s presidential candidate, Bola Tinubu, has for the South-East, asserting that it would be difficult for the latter to get enough votes from the region in the 2023 election.

“During the convention, he (Tinubu) did not even allow us to go to the South-East. He said it is a waste of time and money. South-South is not his territory, so where is he going to get the vote,” Mr Lawal said on Thursday on a Channels television programme as he continued his rundown of Mr Tinubu.

Mr Lawal was a strong supporter of Mr Tinubu until the APC candidate ignored his advice against picking Kashim Shettima, a Muslim from Mr Lawal’s North-East zone as running mate. The former SGF and a group of northern Christian APC chieftains have since vowed not to support their party’s Muslim-Muslim presidential ticket.

Mr Lawal’s latest slam on Mr Tinubu came barely a few hours after he declared support for Peter Obi, presidential candidate of the Labour Party. It also coincided with Mr Tinubu’s visit to southeastern Ebonyi, in continuation of his presidential campaign rally.

The APC presidential candidate during his visit to Ebonyi on Thursday said he would protect the businesses of the Igbo people if supported and elected next year.

“I believe in the entrepreneurial spirit of the Igbo. I encouraged a lot of Igbo businesses and investments in Lagos and will even do more if I become president.

“If elected, there will be no discrimination. Igbo interests will be respected and protected. I will also encourage policies to aid commerce and support South-East states to reach their full potential,” Mr Tinubu said.

Positing further on the programme, Mr Lawal said the APC presidential candidate refused to listen to advice despite warning on his choice of running mate.

The former SGF added the “APC is not on the ballot”, reiterating that Mr Tinubu’s choice of a joint Muslim ticket would cost him the election, and the northern Christians will not support the such decision.

According to him, it would also be difficult for the APC presidential candidate to garner enough votes in the northern states considering that Atiku Abubakar, the PDP candidate is from the zone.

“So, my thinking is that Bola (Tinubu) would not get 25 per cent votes in Kebbi, Sokoto, Zamfara, Kano, Yobe, and Borno. In all the Hausa-Fulani states, he goes nowhere,” he added.

An APC chieftain, Mr Lawal has continued to maintain that he will remain in the governing party despite his criticism of the party’s presidential flag bearer.

But Mr Tinubu has repeatedly said that his choice of the former Borno governor, Mr Shettima, is purely based on competence and not on religious persuasion. He claims Mr Lawal and his cohort were embittered because he bypassed them to pick Mr Shettima as running mate.