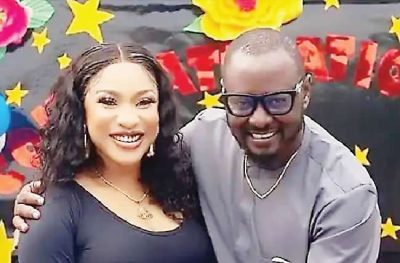 Actress, Tonto Dikeh, has said she will not stop laughing over the demolition of the Abuja property of her ex-lover, Joseph Egbri, popularly known as  Kpokpogri.

Dikeh, who took to her Instagram page, insisted that she will never sympathise with him.

She wrote, “Anyone waiting for me to stop laughing is a complete joker. I can’t and will never sympathise with this man. It’s his cross, he should carry it.

“This man almost killed me financially, emotionally and otherwise. If I had committed suicide after he threatened to expose our explicit tape or even when he released the crying audio, it would have been two weeks of goodbyes and the world would move on.

“People need to understand that karma exists and I hope it’s not the last until he does the right thing!! #justiceforeveryone.”

Recall that Egbri had, early on Saturday, cried out over the demolition of his home.

During an Instagram live session, he claimed that the house was worth over 700 million, and was destroyed over what he termed ‘order from above’.

He said, “They told me the order was from above. I have my building approval, I have all my documents, and I paid N4 million for the documentation fee.”

He also alleged that the home was demolished because he is from the Niger Delta and had refused to sell the house to ‘them’.

Egbri claimed that the house was worth over N700million. He added, “I don’t know what is happening. The next thing the Federal Capital Development Development Authority started demolishing my house without giving me any notice. I don’t know the person who paid them to do this.

“Everything you see in this place; I spent over N700m, my hard-earned money. I don’t know the person that is eyeing this place, I don’t know who you people want to reallocate it to, but this isn’t going work.”