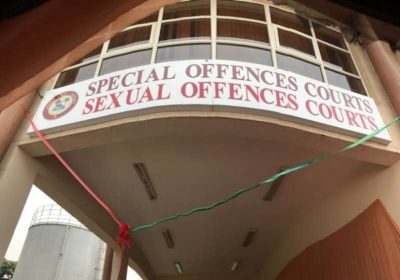 A traditional healer, Prince Tom, was on Wednesday sentenced to two life sentences by an Ikeja Domestic Violence and Sexual Offences Court for abducting and defiling the 15-year-old daughter of his patient.

Newsmen report that Justice Abiola Soladoye sentenced Tom after finding him guilty of two counts of defilement and kidnapping.

Delivering the judgment, Soladoye said that the evidence of the first prosecution witness (the survivor) was consistent and remain unshaken during cross-examination.

The judge noted the evidence of the second prosecution witness (survivor’s mother) and other witnesses also corroborated key facts of the survivor’s evidence.

“The defendant is toxic in character, he used the name of God to deceive his victims, he is mean and callous.“His attitude even while in the dock is wicked, deadly and nonchalant.

“The defendant extorted the mother of the victim and brainwashed the family that he will heal their sick breadwinner.

“This is a note of warning to parents not to entrust their wards to strangers. This is a case of man’s inhumanity to man.

“The prosecution has proven its case beyond reasonable doubt. In view of all evidence presented in court, I am convinced that the accused is guilty of these two- counts.

Newsmen report that testifying on June 22, 2021, the survivor told the court that she met Tom for the first time when he came to her family to treat her father who had suffered a stroke.

She said he was introduced to the family through a member of her mother’s church.

She said the convict had charged N25,000 as part of the fee to treat her father and she was instructed by her mother to go with Tom to a Point of Sale (POS) to withdraw the funds.

She said she was abducted by the convict who thereafter, called her mother to demand “transport money” for her to return to her family and her mother sent N10,000 (N5,000 in two tranches) to meet Tom’s demands.

The witness narrated that Tom took her to Osmak Hotel, Mushin Lagos where he defiled her at gunpoint. He fell asleep after the defilement leaving the room key on the bed.

The teenager said that using the key, she escaped from the hotel room and alerted hotel staff and the authorities to her ordeal.