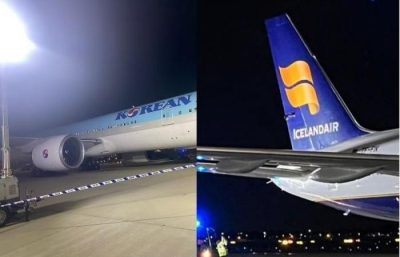 A report by Daily Mail has it that two planes crashed into each other while taxiing on Wednesday evening at Heathrow Airport in London.

It said that emergency services rushed to the scene after the collision.

The airport management confirmed that the incident between the two commercial passenger planes took place around 8pm, adding that no injuries were reported.

The two planes involved are a Korean Air 777 plane, which “scraped into” an Icelandair 767 jet.

According to an eye witness, it wasn’t a “full on” collision.

The Korean Air flight Flight #KE908 was due to leave London at 19:35 to Seoul, Korea, Daily Mail added.

However, a considerable damage was done to the Icelandair’s tail by the Korean Air’s wing, as a result of the collision

One passenger wrote on Twitter: “Pretty sure we scrapped another plane with our wing tip while taxiing.

“We have been told that we are going back to the gate due to a technical issue.

“But that was 15 minutes ago and we haven’t moved.”

Another person who was also on board said there was “no apparent danger”, adding that “nobody” was hurt.