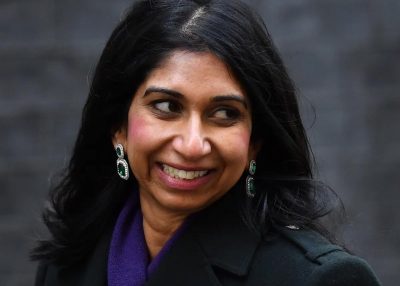 The attorney general of the England and Wales will decide within 14 days if Ike Ekweremadu, former deputy senate president, and his wife, Beatrice, will face trial in the UK over allegations of human trafficking.

The couple were charged to the Uxbridge Magistrates Court on Thursday and remanded in custody until July 7 pending further investigation.

Damla Ayas, the crown prosecutor, told on the court that “part of the allegations” against the couple took place in Nigeria.

He said the case was “unique” and would require a decision by Sue-Ellen Braverman (pictured), the attorney general, on where the trial will be held.

On Thursday, the London metropolitan police announced that the Ekweremadus were charged to court over the allegation of bringing a child to the UK for organ harvesting.

The London metropolitan police said they were charged following an investigation by the police’ specialist crime team.

The police added that the investigation was launched after detectives were alerted to potential offences under modern slavery legislation in May 2022.

WHAT WE KNOW SO FAR

Ekweremadu had in December 2021 written a letter to the British high commission in Nigeria backing the visa application of a potential kidney donor to his daughter.

He said the donor and his daughter “will be at the Royal Free Hospital London”, adding that he would “be providing the necessary funding”.

Although the donor is said to be 21 on his international passport, the Met police said he claims to be 15 and is thus regarded as a minor.

The prosecution told the court that an appointment was made for the “teenager” at the Royal Free Hospital in Hampstead but the consultant refused to proceed because he had concerns “about the 15-year-old boy”.

He returned to the address of the Ekweremadus in London before reporting to a police station.

Because he is now considered a minor, TheCable is withholding his name.  (The Cable)