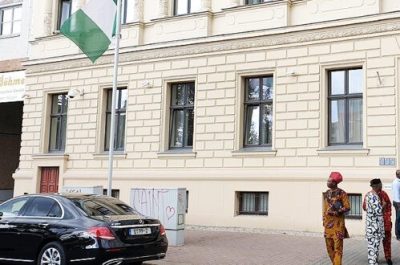 The Chief Security Officer of the Nigerian Embassy in Berlin, Germany, Martins Oni, who was caught in a hotel room in November 2020 with a married woman he allegedly demanded sex from before allowing her into the Embassy to process her passport has again gone viral.

In the video, which has since gone viral, Oni had to cover his manhood with a white towel when bursted in the hotel.

He was caught with his pants down in a hotel room after he had allegedly asked an unnamed and married lady to have sex with him before he could allow her into the premises of the Embassy.

A shocked Oni could be seen in the video looking into the camera in fear and disbelief.

A man was heard interrogating Oni in anger, while he yanked the towel off Oni’s waist, which exposed his penis and buttocks.

An apprehensive Oni quickly used a white bedsheet to cover himself.

Then the voice started accusing him of engaging in sex for passport activities.

“I spoke to her and we agreed.”

However, the background voice noted that Oni forced the lady and that he had proof.

He also disclosed that he has been investigating Oni with the help of the lady .

The voice behind the camera accused Oni of wanton sexual encounters he had in the past in exchange for delivering his official duty.

The voice said: “Your cup is full, Martins.

The Embassy has since sacked Oni.

It said in a statement on December 7, 2020: “Mr Oni was suspended from duty on 17 November after reports emerged that he had curried sexual favours in return for help with the renewal of a passport.”

“The Embassy immediately established an Investigation Committee to examine the allegations and any related issues, and to make recommendations for action.”

It said a committee interviewed Oni and other witnesses as part of a thorough examination of the charges, concluding that he was culpable and in violation of all the relevant codes.

It added: “The Embassy is grateful for the help of the public in tackling such abuses. As public servants, we pledge to follow all due process as part of our continuing commitment to deliver the highest ethical & professional standards in all our operations, also at Consular & Immigration.”