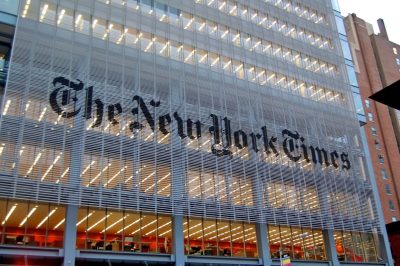 Hundreds of journalists and other employees at The New York Times have begun a strike over the demand for better salaries and improved health insurance funding.

In a statement on Wednesday, The NewsGuild of New York, a union of media workers, said the action followed the company’s refusal to reach a contract agreed with the workers.

Over 400 New York Times tech members have also sent a petition to management announcing their intent to walk out for one hour because of “similar struggles that they’ve faced at the bargaining table”.

“Today’s bargaining was a planned session; the company has otherwise refused to enter into additional marathon bargaining, which the members requested in their letter to CEO Meredith Kopit Levien and Publisher A.G. Sulzberger as a way to reach a decision on a contract before their planned one-day walkout on Thursday, December 8,” the statement reads.

“The major sticking points continue to be around economics, especially wages, a $65,000 salary floor proposed by the Guild, and funding employees’ health insurance sustainably.

“The company has frequently misrepresented its own proposals to the public and the press, especially by claiming ‘increases’ in compensation that are really unspoken hypotheticals neither side recognizes as possible outcomes of bargaining.

“All workers who signed the walkout pledge are anticipated to participate in the one-day work stoppage, with some major desks losing 90% of their workforce that day, and other departments being essentially empty of Guild employees.”

Susan DeCarava, president, NewsGuild of New York, said the strike, which is the first in 40 years, is to ensure that the company rewards those behind its success.

“The New York Times, which has not seen a work stoppage of this scale since the ’70s, is on notice. Our members understand the value of their labor, and it’s time for Times management to demonstrate the same,” DeCarava said.

“Guild members at The New York Times are determined to ensure that, through collective action, the company lives up to its mission when it comes to all the workers responsible for its meteoric success during the past several years.”

Speaking on the matter in a statement, workers at the New York Times described the decision as a difficult one and asked readers to boycott the paper for a day in solidarity.

“This is not a decision we take lightly. We know you count on us for vital news and information,” the statement reads.

“Our fight to ensure a living wage for the most vulnerable of us and fair pay for everyone, for evaluations free of racial bias and to protect our health care is really about the future of journalism at The New York Times.

“Without these protections and benefits, our journalism suffers and our newsroom will fall behind those of our competitors.

“So today we are asking that you take a further step to support us: For 24 hours beginning at midnight. E.S.T. Thursday and continuing through 11:59 p.m. E.S.T. Thursday.”

“We are committed to winning the union contract we all deserve – one that truly values our work – and appreciate your support in that fight.

“Everyone benefits when workers get a fair deal, and that’s what we’re fighting for.” (The Cable)