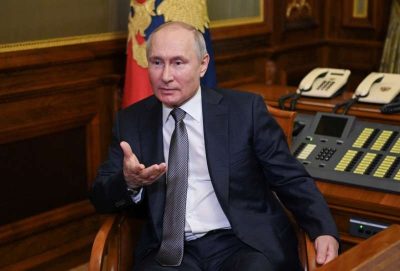 President Vladimir Putin told French counterpart Emmanuel Macron on Friday that the West was ignoring Moscow’s security concerns over Ukraine but added that Russia would hold off from taking action immediately.

Putin and Macron spoke by phone amid deep fears that a Russian troop build-up on the Ukrainian border is a precursor to a Russian invasion of its pro-Western neighbour.

Russia denies any plans to invade but has demanded wide-ranging security guarantees from the West, including that Ukraine never be allowed to join NATO.

The Kremlin said in a statement that Putin and Macron held a “long telephone conversation” and that Putin expressed his dissatisfaction with a US response to Moscow’s demands that was delivered earlier this week.

“The US and NATO responses did not take into account Russia’s fundamental concerns including preventing NATO’s expansion and refusing to deploy strike weapons systems near Russia’s borders,” Putin told Macron, according to a readout of the call from the Kremlin.

“The key question was also ignored,” Putin said, pointing to the “principle of the indivisibility of security” in international affairs, that no country should strengthen its security at the expense of others.

He said Russia would “carefully study” the responses “after which it will decide on further actions”.

Russia has deployed some 100,000 troops on Ukraine’s borders in recent weeks, prompting warnings from the West of severe consequences should it invade its pro-Western neighbour.

Macron had announced earlier this week he would hold the telephone talks with Putin in the spirit of a “demanding dialogue” with Russia for clarification over Moscow’s intentions on Ukraine.

The Elysee on Wednesday hailed as a “positive signal” talks in Paris between Russia and Ukraine — as well as France and Germany — which produced the first joint written statement on the conflict in eastern Ukraine signed up to by Moscow and Kyiv since 2019.

They agreed to preserve a ceasefire in eastern Ukraine — where pro-Moscow separatists declared breakaway regions — and to hold new talks in Berlin in February.

Putin on Friday told Macron it was important for Ukrainian authorities to establish “direct dialogue” with separatist leaders.

“Taking into account the results of the meeting” in Paris, the Kremlin said, “the mood for further work of Russia and France in this format was confirmed.”

Russia’s demands, delivered last month, include the ban on NATO membership for Ukraine but also a pullback of NATO forces deployed to Eastern European and ex-Soviet countries that joined the alliance after the Cold War.

Washington on Wednesday delivered a reply in coordination with NATO allies, saying Ukraine had the right to determine its own allies but offering Russia talks on missile placements and other mutual concerns.

The West also stepped up its threats of possible action in response to an invasion, with the United States and Germany warning that a major gas pipeline was at stake.

The Nord Stream 2 pipeline, which Germany has defiantly built despite criticism by the United States and Eastern Europeans, will more than double supplies of Russian natural gas to Europe’s largest economy.

US President Joe Biden spoke Thursday by telephone with Ukrainian President Volodymyr Zelensky and said the United States was considering economic support after $650 million in military assistance over the past year.

Biden “reaffirmed the readiness of the United States along with its allies and partners to respond decisively if Russia further invades Ukraine,” a White House statement said.

Zelensky was due later Friday to give a major press conference on the crisis.

Ukrainian officials have been less aggressive than Washington in saying an invasion is imminent, but have welcomed Western shows of support.

NATO has put 8,500 troops on standby over the Ukraine crisis, in scenes reminiscent of the Cold War with the Soviet Union, and Western countries have stepped up shipments of military aid to the country.

In the western region of Lviv on Friday Ukrainian soldiers were testing NLAW anti-tank systems recently delivered by the British, firing the shoulder-mounted missiles at targets in snow-covered fields.

Russia, which has a fraught historical relationship with Ukraine, has fuelled an insurgency in the former Soviet republic’s east that has killed more than 13,000 people since 2014.

That year Russia also seized Crimea after the overthrow of a pro-Russian government in Kyiv, sparking widespread Western condemnation and sanctions.