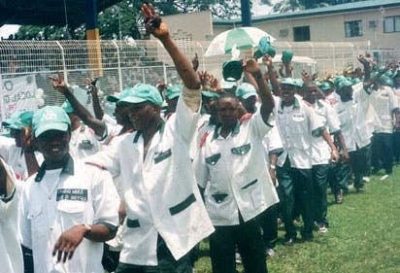 Over the last three decades, Oyo State has always been notorious for bloodletting, maiming and high-profile killing whenever general elections approach. Some hoodlums would offer themselves as readymade tools and instruments of human destruction onto the hands of unscrupulous political leaders.

Tokyo, whose real name is Alhaji Lateef Akinsola, reigned supreme during the Peoples Democratic Party’s era of Senator Rasheed Ladoja and Otunba Alao-Akala as governors in the state. The National Union of Road Transport Workers’ warlord was indeed lord unto himself. For many years, he was inciting violence, chaos and pandemonium in the pacesetter state. On behalf of politicians, he maimed and destroyed at will. He was in control for so many years until his regime of horror was brought to a close by the late Abiola Ajimobi. The man whom thousands of people of the ancient city dread so much like a plague is lucky to be alive today.

After Tokyo came another king of hoodlums, Eleweomo (real name Alhaji Lateef Salako). The modus operandi was the same. They created pandemonium and confusion and snuffed life out of perceived political foes. Eleweomo also established an imperial reign of terror for years in Ibadanland and beyond, until he met his waterloo in a crunchy battle.

Presently, another warlord, Alhaji Lamidi Mukaila, better known as Auxiliary, has emerged in the ancient city. His stock in trade is to always threaten fire and brimstones (reminiscent of Tokyo and Eleweomo days); he also drums it to the hearing of whoever cares to listen to him of his capacity to kill, destroy and maim. The strategy is essentially coercing political opponents into submission.

Meanwhile, the news in the public domain is that he’s working for the PDP government in the state, a fact that the government have not denied.

The question we need to ask here is: When did our nation turn into the land of bloodsuckers, hyenas, hitmen and cannibals who at the slightest provocation snuff life out of fellow countrymen simply for political reasons?

Must the entire nation wait for another dastard killing of a prominent Nigerian before the law enforcement agents and security forces swing into action and pick Auxiliary for questioning and, perhaps, prosecution for the alleged havoc he and his group have committed in the state so far, as well as torrents of threats of killing that they’ve issued to perceived political enemies?

The Inspector General of Police, Usman Baba, as a matter of urgency needs to declare a state of emergency on the security situation in the state by dispatching a special squad into all the nooks and crannies of the state with a view to smoking out Auxiliary and his boys who have constituted menace and threat to the entire citizenry of the state.

This is the only way that the police authority would not only attract the trust and confidence of Nigerians but also reassure the people of the state that they’re alive to their constitutionally recognised responsibility.

Nigeria’s democracy has come of age since the turn of the Fourth Republic in 1999. Politicians ought to have reconciled themselves with the new ethos of seeking and canvassing electorates for support at the polls instead of sending hoodlums and miscreants to would-be voters to forcefully attract their support.

The IGP must seize this opportunity to institute orderliness and normalcy in the state, and re-assure law-abiding citizens of the state of the need to go about their daily undertakings without harassment and molestation from any quarter, not even from the agents of the government