Why I dumped APGA for LP – Victor Umeh opens up 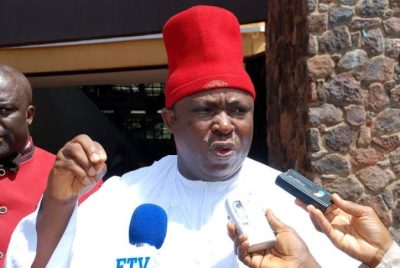 Chief Victor Umeh, the former National Chairman of the All Progressives Grand Alliance (APGA) said he defected to Labour Party, LP for because of conspiracy against him by some members of his former party in Anambra state.

Umeh who is now the LP candidate for Anambra Central Senatorial District in the 2023 general elections, after leaving APGA spoke to journalists in Awka, Anambra state capital on Tuesday.

He added that LP’s presidential candidate, Mr Peter Obi also convinced him to abandon APGA for his party.

Umeh said, “During the last senatorial primary election, which I contested under APGA, it was glaring that some people within the party perfectly wheeled conspiracy to pull me down.

“That was why I decided to leave APGA,” he said.

He further expressed delight over his movement to LP, saying that the decision had reunited him with Obi.

He recalled how Obi and himself steered the ship of APGA to victory and opined that a similar fate was about to repeat itself in LP.

“Nigerians from all shades of opinion want Peter Obi as president in 2023 and what is happening in LP is divine.“What is driving him are statements he makes on the management of the resources of the country.

“These truly represent his conduct on the ways public resources should be managed,” Umeh said.

He urged Obi’s supporters to ensure they obtained their permanent voter cards ahead of the elections to enable the country witness a progressive era.He commended the leadership of Anambra NUJ “for providing a platform for people to communicate to the public”.

The state Chairman of LP, Mr Ugochukwu Emeh, said it was wrong for some people to say that the party did not have structures across the country.

“Labour is a political party registered by the Nigeria Labour Congress and Trade Union Congress.

“It includes the NUJ and we have more than 50 million people who are members of these bodies.

“In addition to these groups, millions of Nigerian youths, whose future has been messed up by bad leadership, are the ones driving the Obi’s movement,” Emeh said.

The state Chairman of NUJ, Dr Emeka Odogwu, said the event was organised to provide an avenue for people to be better informed on current political happenings.