Why I refused to answer questions from New York Prosecutors – Trump 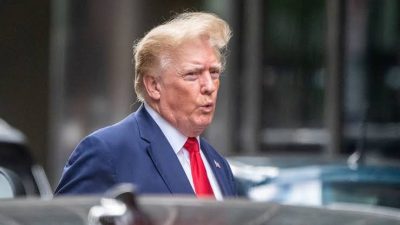 Former US President, Donald Trump says he refused to  to answer questions from New York (NY) prosecutors about his resort and real estate businesses because he did no wrong.

The NY prosecutors is being led by State Attorney General Letitia James.

He invoked his Fifth Amendment rights against self-incrimination and declined to answer questions from the New York attorney general at a scheduled deposition Wednesday.

The Fifth Amendment guarantees that an individual cannot be compelled by the government to provide information that might be incriminating against themselves.

Trump, in a statement said he declined to answer the questions under the rights and privileges afforded to every citizen under the United States Constitution.

“I once asked, ‘If you’re innocent, why are you taking the Fifth Amendment?’ Now I know the answer to that question. When your family, your company, and all the people in your orbit have become the targets of an unfounded, politically motivated Witch Hunt supported by lawyers, prosecutors, and the Fake News Media, you have no choice,” New York Post quoted Trump in the statement.

He suggested that James openly campaigned on the policy of ‘Get and Destroy Trump.’

The ex-American henchman argued that James developed a political platform and made a career out of maliciously attacking him and his business before she was even elected, or reviewed one of the millions of pages of documents they willingly produced.

According to the CNN, in January, James’ office said it found “significant” evidence indicating the Trump Organization used false or misleading asset valuations in its financial statements to obtain loans, insurance and tax benefits. The attorney general’s civil investigation is nearing the end and a decision over an enforcement action may come soon.

The Department of Justice is also investigating Trump’s role in attempting to overturn the results of the 2020 election and his culpability in the violent Jan 6., 2021, Capitol riot.

“My beautiful home Mar A Lago in Palm Beach, Florida is currently under siege, raided and occupied by a large group of FBI agents,” Trump had said in a statement on Tuesday.

“After working and cooperating with the relevant government agencies, this unannounced raid at my home was not necessary or appropriate,” he added.

The execution of a search warrant at a former president’s home comes as the Justice Department has accelerated its investigation into the Jan. 6 attack on the Capitol.

It is also examining Trump’s actions to overturn the 2020 election results to remain in power.

It was not immediately clear what was examined during the search, but Trump said the law enforcement officials “even broke into my safe.”

“Nothing like this has ever happened to a President of the United States before,” Trump said.

Billionaire Abdul Samad Rabiu and son get $151.6 million in dividends from food business