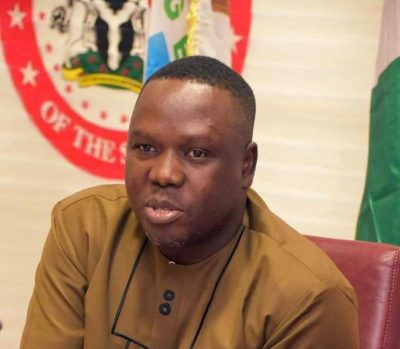 Daniel Bwala, a spokesperson for the Atiku Abubakar presidential campaign, says he will not “malign” the image of Bola Tinubu, presidential flagbearer of the All Progressives Congress (APC).

Bwala, a member of the Peoples Democratic Party (PDP), spoke on Thursday during an interview with Channels Television.

He was appointed alongside Dino Melaye, a former senator, as spokesperson for the campaign organisation on Thursday.

In July, Bwala, a legal practitioner, resigned his membership of the APC over what he described as his “principles and conviction”.

He had criticised the APC over the choice of a Muslim, Kashim Shettima, former governor of Borno, as the vice-presidential candidate — since the party’s presidential flagbearer is also a Muslim.

Speaking during the interview, Bwala said he did not leave the APC because Atiku promised to reward him with an appointment as being insinuated in some quarters.

“I can tell you without mincing words, Atiku Abubakar is the last politician in Nigeria you can accuse of being nepotistic or a religious bigot. Even the fiercest critic can tell you that. If you look at the team that surrounds him at the moment, we have even less of northerners,” he said.

“I know of some persons who currently operate as political mercenaries, like one that wrote an article against me, a few days ago. They are operating as mercenaries. Let me give you an example, somebody said I left because I wanted appointment with Atiku.

“Asiwaju Bola Ahmed Tinubu, the flagbearer of APC, promised that he was going to make me the presidential spokesperson for his campaign and he made the promise a few weeks before the primary, and I have witnesses that know themselves and they are of high repute in government, in the party and around him.

“This is not even a dispute. I’m saying that on record because if what I’m saying is not true, asiwaju Bola Tinubu must be seeing the interview today and my memory of asiwaju Bola Ahmed Tinubu is a sweet memory.

“I have my highest regards and respect for him. I say even in this election, I will never engage in maligning his image and character. There are people that will like to tempt you to do that.

“My last memory of him was a sweet memory where he gave me regard that governors and senators did not get, and I respect that. This is not about me and asiwaju, and this is about Nigeria and what we are facing.” (The Cable)