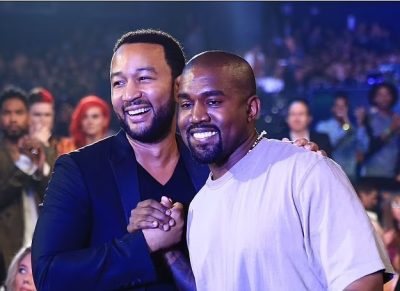 John Legend, the US singer, has opened up on his strained relationship with Kanye West, the rapper.

Legend said his failure to support the American rapper’s 2022 political ambition got in the way of their friendship.

After endorsing the now-former US President Donald Trump in a move Legend dissuaded him on, West had in July 2020 announced he would be vying for the office himself with the preacher Michelle Tidball as his running mate.

Political pundits would speculate that West’s presidential run was a publicity stunt to promote his music releases.

In an interview with Newyorker, Legend said Kanye was upset after he didn’t support his presidential bid.

“That was the real impetus for us having a strain in our friendship. I don’t know what will happen in the future, but he was very upset with me that I didn’t support him and I supported Joe Biden,” the singer said.

“But I do believe that certain things you believe in are indicators of your character, and obviously that will affect your friendships.

“I mean, what are friendships? If they’re not your blood relatives, in many ways they’re defined by your impression of that person’s values and whether or not there’s some level of compatibility with the way you see the world.

“The fights we’ve had over the past six years on Twitter, particularly around Trump, kind of made politics everything for a lot of people.

“I don’t want to live a life that’s so consumed by politics that it’s the sole determinant of who can be my friend and who can’t. But values matter and character matters and moral compass matters.”

On his non-endorsement of Kanye, Legend said he felt the rapper’s bid was an operation run by the Trump campaign.

“Everyone saw how I talked to him about it. I talked to him with love and with empathy and tried to help him see another way of looking at things. And obviously, he went the way he went with it,” the pianist further said.

“The most frustrating thing about his run for the presidency for me was how much it was an operation run by the Trump campaign.

“I don’t know how aware he was of the fact that there was so much Trump personnel throughout his campaign, raising money for him, getting petitions signed for him, getting him on the ballot.

“I saw their work on his behalf as a clear scam and an operation to try to siphon Black votes away from Biden, so there was no way I was going to support it. Kanye was upset with that, and we haven’t been friends since, really.” (The Cable Lifestyle)

Bovi slams critics for saying his daughter is ‘rude’