‘Why Radio Biafra broadcaster Ekpa was sacked by IPOB’ 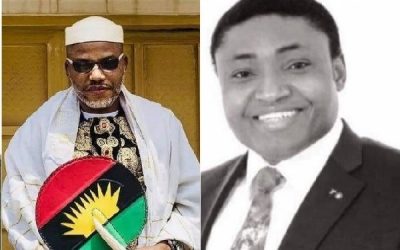 The leader of the Indigenous People of Biafra (IPOB), Mazi Nnamdi Kanu, has relieved Mr. Simon Ekpa of his appointment as a Biafra radio broadcaster, over failure to follow the laid down rules of operation in Radio Biafra.

In a statement by the Media and Publicity Secretary, Emma Powerful, the group said Ekpa has refused to sign the rules of engagement and code of conduct guiding those broadcasting on Radio Biafra.

It wondered why he would not like to follow the steps of other broadcasters on the platform, who have since done the needful.

The body, however, noted that the decision to disengage Ekpa was not to ridicule him, but to prove to all that due process could not be compromised in IPOB as a well- structured movement.

‘Southwest must not be destabilised’ – Yoruba forum kicks against secession