Why the odds favour Tinubu: Letter to Obi supporter Odinkalu 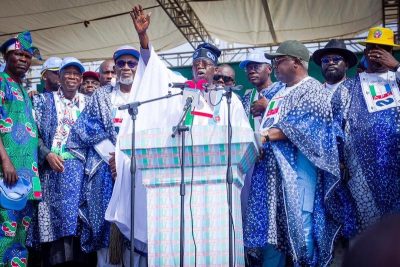 THE ODDS FAVOURS TINUBU TO WIN THE 2023 PRESIDENTIAL ELECTION

For those running around focusing on Tinubu’s age, certificates, alleged ill-health, bublubla and Muslim-Muslim ticket, that is an ineffective political tactic.

Here is Atiku’s challenge. It is in the numbers! The same applies to Peter Obi or Kwankwaso.

Below are 14 Northern states with APC governors.Which one do you think Atiku’s PDP, or Kwankwanso’s NNPP or Peter Obi’s Labour Party will win?

At the Eagle Square in Abuja, 13 of them campaigned for and got Tinubu elected as the Presidential flag bearer of the APC. Today, all these governors, including Yaya Bello of Kogi State are supporting Tinubu and there is no crack in their ranks.

Can Atiku or Kwankwanso or Obi peel away any of these governors?

For emphasis I have also included the south-western states under APC control or in Tinubu’s electoral basket:

To complicate Atiku’s path to victory is the enthusiasm being generated mostly in some southern cities for Peter Obi’s Candidacy. In the south, the PDP is mostly dominant in the South South and South East. Even 3 of the governors in these states are APC!

In 2015, the APC won mainly because all the opposition political parties merged and formed a formidable political platform whereas the ruling PDP was enmeshed in an intractable crisis and a political war of attrition with at least 5 sitting governors, the Senate President, Speaker of the House of Representatives, several senators and House of Representatives members including serving Ministers leaving the party.

The exact reverse scenario is playing out in 2023. The APC is intact but the opposition is sinking deeper into opposition and is fragmented with Peter Obi and Rabiu Kwankwanso leaving the PDP. The PDP G-5 governors have crossed the rubicon and will not be supporting Atiku’s candidacy in the presidential election. They are expected to declare their support for either Tinubu or less likely Peter Obi in the coming days. This will be fatal to Atiku’s chances and unlikely to shore up Peter Obi’s chances in any significant manner.

Until we see a crack in the APC governors’ support, Tinubu is sitting pretty well and the odds are clearly in his favour to win.

The opponents of the APC Candidate say the Buhari administration has not done well but this is vehemently contested by APC party stalwarts who insist that Buhari is the best thing to happen to Nigeria. Will this count during the 2023 Presidential election? The answer so far is No, using Ekiti governorship election as a barometer, even though it is a very small sample size.

Even the Osun election was won by PDP simply because Ogbeni Rauf Aregbesola and his faction of the APC were alleged to have worked against the candidate of the APC.

Those opposed to Tinubu, rather than hold him to a campaign of issues are wasting their time with his age, alleged ill-health, his Muslim choice as running mate etc. They even want the courts and INEC to disqualify Tinubu. None of these will work or even happen!

Indeed, Tinubu has so far campaigned more hungrily and more comprehensively than any of his challengers. From the UK to Saudi Arabia, then Kano and Edo states and then back to Kano…all in 4 days!

On Monday, 9th January, he will be in Adamawa state with President Muhammadu Buhari leading the charge for votes in the state and other core northern states in quick succession putting a lie to the claim by the PDP that Buhari has vowed not to join the Asiwaju campaign train. The supposedly fitter candidates are all lagging behind Asiwaju.

The only way to defeat Tinubu will be at the ballot by all the opposition candidates stepping down for only one of them but this will also never happen.

Tinubu is still in pole position for now and coasting to victory.

Atiku lacks the bite….majority of southerners are also unlikely to stomach a potential 16 years of a northerner presidency. In a very commendable display of statesmanship, patriotism and to guarantee national cohesion stability, the political leaders of Northern Nigeria also desire to respect the North-South power rotation on which plank President Goodluck Jonathan was defeated in the North and then eventually nationally in 2015.

It is almost late in the day to upstage the entrenched political system in Nigeria and by the current political and electoral system and in a free and fair contest, Asiwaju Bola Ahmed Tinubu appears unstoppable and a Jagaban presidency looms large.

Dr. Philip UgbodagaCitizen of the Federal Republic of Nigeria (CFRN)

Ex-aide speaks on Atiku’s corruption via SPV, warns Nigerians not to vote for him

AMCON, NDDC, NEDC and Other Errors

Stop condemning Nigeria, we are doing better than most…