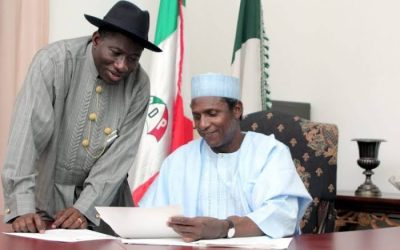 Former President Goodluck has not forgotten his boss and predecessor, President Umaru Yar’Adua as he penned an emotional memorial tribute, 12 years after his death.

In a Facebook post on Thursday, titled PRESIDENT YAR’ADUA: 12 YEARS AFTER, Jonathan described Yar’Adua as a leader difficult to replicate.

“He was a soldier of truth, committed to justice, equity and other democratic virtues. He was a servant leader and a good man; the type that is hard to find”, he wrote.

Yar’Adua from Katsina like President Muhammadu Buhari died of ill-health 5 May 2010, almost three years after he was sworn-in.

President Jonathan completed his term and went on to win the 2011 election.

Twelve years ago, our nation lost a patriot, a selfless leader and a peacemaker who governed with sincerity and passion for the people. President Umaru Musa Yar’ Adua is no longer with us today, but his strides in public life continue to testify for him and keep his memory alive.

Like a good athlete, he ran with passion, kept the faith and finished the race. Today we can look back and say, as President he won laurels for us in terms of peace and other worthy causes he successfully pursued.

He was a soldier of truth, committed to justice, equity and other democratic virtues. He was a servant leader and a good man; the type that is hard to find.

He was my boss.

President Yar’Adua, we remember you today and will continue to remember the good works that you did in our nation. Yours is a story of patriotism, a life well-lived in service to the people and humanity.

‘Prayers, appeal were made to get pardon’ — Lalong speaks on Dariye’s release from…