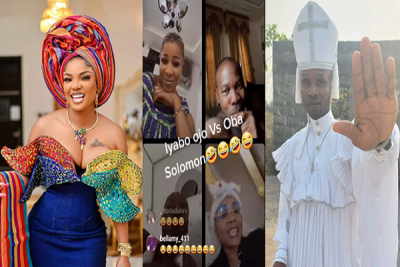 Popular actress Iyabo Ojo has informed controversial cleric, Prophet Adelana Solomon aka Oba Solomon that she is the kind of partner who totally steals her spouse’s love and affection, leaving none for any other.

The duo recently engaged in a rousing conversation during an Instagram Live session with her colleagues Kemi Korede and comic act Olatayo Amokade aka Ijebu.

During the session, Oba Solomon wooed Iyabo Ojo, claiming he was well aware of her desires, likes and dislikes.

He said: “I know what you want. What you be and who you be. What you like and what you dislike.”

However, Ojo notified her suitor that she didn’t want anything with a married. “But I don’t want a married man but you are,” she cut in.

“If it’s what I want, you don’t fall in that criterion. I don’t want a married man in my life right now, I need a single bobo,” the actress added.

As the other two watched and listened to Iyabo and Oba Solomon with keen attention, the latter continued: “You say so, God does not say so. What I see on you is scarce and I need it. Those things aren’t stuff I can discuss here.”

To further buttress her refusal to Oba Solomon’s proposal who is already married to two wives, Ojo noted it was impossible to be married to her kind of person and still remember his other wives at home.

“I am a glorious child. It’s not possible to be married to a person like me and still remember the one at home. I’m the kind of person that when you’re with, you won’t remember another woman.

“I am also the kind of person that loves to fight for women’s interests in general and I wouldn’t want to hurt another one.

“It won’t be nice if I give a single guy breakfast because of a married man. If I were married, would you have talked to me?”

Japa: Buhari has ruined Nigeria but my children will not leave – Atiku