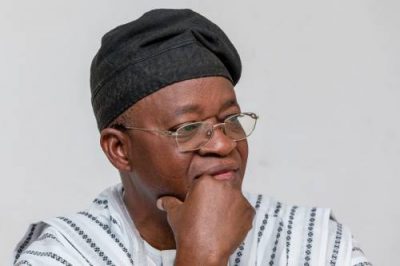 Gov. Gboyega Oyetola of Osun on Friday expressed optimism that he will emerge victorious in the July 16 governorship election, to enable him secure a second term in office.

Oyetola said this during a re-election campaign in Ila-Orangun, Ila Local Government Area (LGA) of the state.

“It will take the Peoples Democratic Party ( PDP) 30 years to recover from the shock it will receive due to the defeat the party would suffer in July 16 governorship election.

”My eight years in power as governor is sure with God on my side.

”The opposition parties should use this period to prepare for governance rather than contesting. Governance is not child’s play,” he said.

The governor appealed to the electorate not to sell their votes, saying that those who were planning to buy votes will not be around after the election.

” Don’t panic. God has ordained us. They will be going about with money, but do not be swayed by their actions.

” Do not sell your children’s future. They will not be available after the election. They are opportunists.

” But we are here for you any day. Do not partake in oath taking because of their money,” he said

The governor also appealed to the electorate to get their Permanent Voter Cards to enable them to vote.

He also commended members of the All Progressives Congress (APC) in the state for always standing by him.

“Do not look for Oyetola on the ballot box, my photograph will not be there.You will look for APC logo with broom and vote with your index finger.

“APC will emerge victorious in Osun,” he said.

Speaking on the ongoing projects in the town, the governor said the Federal Government had established a university in the town.

“We have brought a university to the community which will create job for youths.

“We have done this and you should reward us by voting for us.

“We have invested in health, education, agriculture and other sectors massively and we are feeding 30,000 vulnerable persons on a monthly basis,” he said.