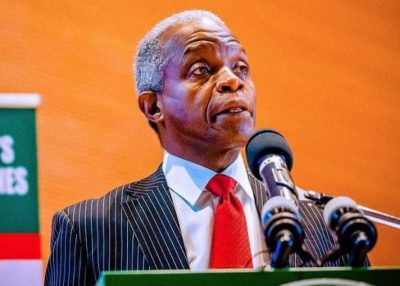 The Vice President, Professor Yemi Osinbajo, has disclosed that the Southwest leaders and elders will soon reach consensus on producing a presidential aspirant for the zone ahead of the 2023 presidential election.

He said consultation was ongoing daily and he was optimistic that the region may reach agreement soon over the differences among the contestants.

The Vice President, who is vying for the All Progressives Congress (APC) presidential ticket, spoke during an interaction with Osun APC delegates at the Government House, Osogbo yesterday.

“I believe strongly in the wisdom of Yoruba elders and leaders and consultations are always ongoing, I believe that very soon we will resolve whatever differences exist and we will reach agreement on the way forward”, he said. Speaking on tackling insecurity in the country, he said the number of security personnel policing the country was grossly inadequate considering its size, adding that more personnel and technology need to be engaged for the country to be properly policed.

“The size of the armed forces is too low for the population of Nigeria; a local government in Niger state, Mashegu has the land mass the size of southeast states and Lagos State with about 100 policemen that is very inadequate, so, to police the country properly, we need more hands in the police and the armed forces.