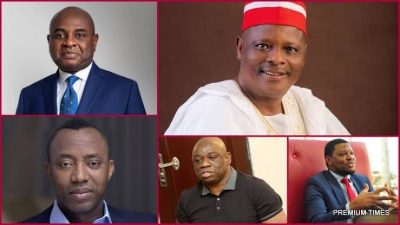 Jun 26, 2022
Only three of the 16 other registered political parties have elected officials but the minor parties want to challenge the dominance of the APC and PDP in 2023
With less than two weeks before all political parties present their candidates for the 2023 General Election, 16 of them are again finding it difficult to draw attention away from the ruling All Progressives Congress (APC) and main opposition Peoples Democratic Party (PDP).

The Independent National Electoral Commission (INEC) has directed all the parties to submit the lists of their candidates by June 3. The two major parties will begin their primaries this week. But despite widespread dissatisfaction with governance by these parties who control the federal and 35 state governments between them, Nigerians are paying scant attention to the pre-election activities of the minor parties that are jostling to offer them alternatives at the elections.

Following the delisting of 74 political parties by INEC in 2020 for their failure to meet the conditions for their registration, only 18 will be on the ballot for the coming elections.

Many of the parties have been busy conducting or preparing for their primaries so as to meet the deadline for the submission of the lists of candidates to INEC.

Other parties ready for mantle

Of the 16, only APGA runs a state government (Anambra), while YPP has one senator also from that state and the NNPP has snatched enough members of the Kano State House of Assembly to become the top minority party in the House.

PREMIUM TIMES reported how the NNPP has dislodged the PDP as the main opposition party in Kano State.

Despite asserting its preeminence in Anambra with the election of its candidate, Charles Soludo as governor last year, APGA’s momentum may have been lost to a leadership dispute in which Victor Oye and Edozie Njoku are both claiming to be its national chairman.

Mr Njoku recently presented documents from the Supreme Court affirming him as the chairman, even though Mr Oye had been certified for the position by the same court on October 14, 2021.

That dispute continues to cause division in some state chapters of the party. In spite of this, APGA will hold its presidential primary on June 1 with Peter Umeadi, supported by Mr Oye, expected to be nominated.

Mr Oye, in an interview on Arise TV, said APGA is ready for the general election.

The SDP is also enmeshed in a leadership crisis in which Supo Shonibare is challenging the leadership of Olu Agunloye and Shehu Gabam, both of who had served as the party’s chairman.

With its National Convention fixed for between May 28 and 30, Mr Shonibare raised an alarm that some new members still have the APC in their hearts, a situation he said may undermine the SDP objectives of claiming power in the coming elections. The party has many members who defected from the APC after they were sidelined in the ruling party.

On its part, the AAC has vowed to “take power back” for the Nigerian people from the “corrupt” APC and PDP. But to do this, it first has to resolve a protracted internal crisis that has pitted a faction against the party’s 2019 presidential candidate, Omoyele Sowore.

Mr Sowore polled 33,953 (0.12 per cent) votes in 2019. He has since been playing the role of party chairman and expects to fly its flag again next year. But a faction led by Leonard Ezenwa has said the Sahara Reporters publisher has long ceased being a member of the party.

Although Mr Ezenwa is the national chairman of the party named on the INEC’s official portal, Mr Sowore’s faction recently fixed the party’s primaries for between June 1 and 3.

The AAC is the only party giving out its nomination forms free of charge. The APC and PDP, for instance, are charging N100 million and N40 million respectively for the same forms.

Can NNPP spring a surprise?

The NNPP is the rave of the moment, especially if you are in Kano State or nearby. The party has become a kind of a mass movement in the state since March when a former Governor of the state, Rabiu Kwankwaso, arrived from the PDP.

In the last couple of months, the party’s ranks have been swelled by federal and state lawmakers, APC and PDP officials, and some aides and commissioners of Governor Abdullahi Ganduje, among other notable politicians in the state who have registered as members.

With the defection of another former governor of the state, Ibrahim Shekarau, from APC during the week, the NNPP has become the latest sensation in Kano politics.

“We are the beautiful bride in the North as it is and we hope to expand to all parts of Nigeria as the best option for Nigerians,” the founder of the party, Boniface Aniebonam, said in a recent interview with the News Agency of Nigeria.

The ADC and PRP have Kingsley Moghalu and Kola Abiola among their presidential aspirants.

With his credentials as a former Deputy Governor of the Central Bank of Nigeria (CBN) and the YPP presidential aspirant in 2019, Mr Moghalu has probably learnt one or two new tricks about the presidential election.

However, to be on the ballot again next year, the ex-CBN boss has to beat off the challenges of Chukwuka Monye and five other aspirants who have paid N25 million each to pick the ADC presidential nomination and expression of interest forms. ADC has fixed that contest for June 1.

That number of aspirants appears to make the party’s ticket the third most coveted for 2023. A total of 28 aspirants picked the APC forms, while 17 picked those of the PDP.

While some leaders of the SDP told PREMIUM TIMES that they have beckoned to the family of the winner of June 12, 1993, presidential election, Moshood Abiola, concerning the 2023 race, his eldest son, Kola, has pitched his tent with the PRP.

Mr Abiola snubbed the namesake of his father’s party and obtained the N10 million presidential forms of the radical PRP.

Possibly banking on his father’s fame, he rejected arguments for the nomination of the party’s flag bearer by consensus and said he was prepared for the primary on May 28.

Waiting to face Mr Abiola in the primary are Gboluga Mosugu and Patience Key.

From APC to YPP

Having failed to raise the N100 million required to buy the presidential nomination forms of the APC, Garba Adamu jumped into the YPP to pursue his ambition.

However, beyond his social media influence, Mr Adamu has yet to prove his political value.