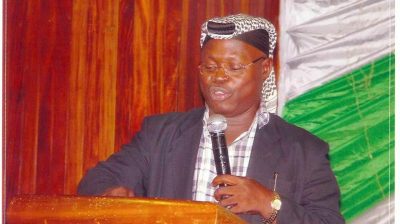 Ishaq Akintola, director of the organisation, said this on Thursday at a media briefing in Lagos in reaction to the request by five US senators for Antony Blinken, the US secretary of state, to re-designate Nigeria as a country of particular concern (CPC).

In December 2020, the US listed Nigeria among countries blacklisted for “violating religious freedom” under the CPC designation.

However, in November 2021, Nigeria was removed from the list.

Citing the attack on St Francis Catholic Church, Owo, Ondo state and the lynching of Deborah Samuel, a female student of Shehu Shagari College of Education, Sokoto, the senators wrote to Blinken, saying there is no “demonstrable improvement in the country’s religious freedom conditions”.

Speaking on Thursday, Akintola accused the Christian Association of Nigeria (CAN) of claiming that only Christians are being killed in Nigeria and of lobbying US politicians until the five senators wrote to Blinken.

He said to claim that the federal government is failing to protect the religious freedom of Christian citizens is a “shameless attempt to upturn the facts of history”, adding that millions of Muslims have faced harassment in southern Nigeria.

“The US should not encourage Nigerian Christians who are entangled in a cobweb of entitlement syndrome. Christian leaders are taking advantage of the precarious security situation in Nigeria which has been compounded by the Libya factor.”

Akintola challenged the US senators to provide the source of their claim that 4,000 Christians were killed in Nigeria as at 2021, adding that Christian leaders are simply capitalising on the enormity of the security challenge facing Nigeria.

“But the fact remains that 90% of the victims of Boko Haram and ISWAP are Muslims and the operations of these terrorist groups are mainly restricted to the North where Muslims are the majority. Therefore, Muslims constitute majority of the victims of violence in Nigeria. No data can dispute that even if it is from a satellite operating on Jupiter,” he said.

“Boko Haram killed 37,500 persons from 2015 to 2018. Of this figure, 32,000 were Muslims, while 5,500 were Christians. This means that 85% of those killed were Muslims. Mosques have been bombed or burned. Imams, Shaykhs and emirs have been abducted and killed. But CAN still wants to deceive the world by claiming that it is Christians alone who are being killed in Nigeria. CAN has lost all credibility.

“The reason killing of Christians appear more pronounced is due to difference in burial culture. Nigerian Christians display bodies of their victims and may even delay their burial for days, if not months, while Muslims bury their victims almost immediately without any fuss. It is photo trick and camera magic that egg on emotions.

“Terrorists are destroying mosques and killing the Muslim worshippers inside in their hundreds. Yet Nigerian Christian leaders say only churches are being attacked. It is absolutely absurd and incomprehensible.”

The MURIC director also said there have been reports of Christians launching “premeditated and well-coordinated attacks on Muslims on several occasions” and mentioned several examples including attacks on Fulani herders in the south-east.

He, however, said there are still good Christians in Nigeria and appealed to them to “disregard CAN’s false allegation and incitement”.

“It has been proved beyond reasonable doubt that CAN is a lying cartel. If CAN has lied more than once, it can lie again,” he added.