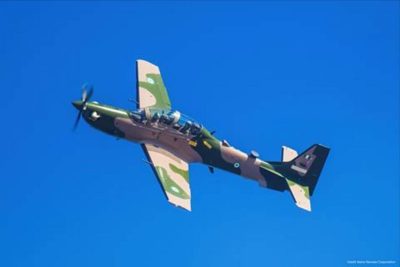 The Air Component of Operation Gama Aiki has eliminated scores of armed bandits in Niger State.

Some civilians abducted by the bandits and held in makeshift structures escaped during the military bombardments.

According to a military intelligence officer who was involved in the operation, credible intelligence had revealed the presence of suspected bandits’ hideout and logistics base at Kusarsu, while the movement of some bandits from Kusarsu towards Kaduna-Abuja Expressway was also observed, earlier in the week.

The source told PRNigeria that a large number of armed bandits were also gathered at settlements in Gaude and Dutse Magaji.

The source added: “Subsequently, Nigerian Air Force aircraft under OPGA were scrambled in the early hours of 26 November, 2021 to take out the targets.

“Overhead Kusarsu, the NAF combat crew sighted several armed bandits gathered at the locations and subsequently launched a coordinated strike after which the location was seen engulfed in flames.

“The aftermath of the strike also revealed remnants of surviving bandits fleeing the location.

“It was also observed that about 50 Metres from the target location, several persons suspected to be kidnapped victims were observed escaping out of a makeshift structure and fleeing to nearby civilian settlements.

“Similar strikes by NAF platforms at bandits’ locations in Gaude and Dutse Magaji had the same effects as remnants of the bandits were observed to be scampering from the location.

“Feedback from locals as well as own deployment around Kusarsu revealed that at 67 corpses of bandits have been counted during assessments the destroyed logistics bases destroyed of the terrorists.”

Other sources told PRNigeria that persons seen escaping from a makeshift structure were indeed kidnapped victims who took advantage of the airstrikes on the bandits’ location to escape.

The bandits operating along Kusarsu axis orchestrated the attack on a train along the Kaduna-Abuja rail track on 20 October 2021.

There is also a strong indication that several bandits may have been neutralised at Gaude and Dutsin Magaji after the airstrike.

Of recent, these sustained attacks by NAF aircraft in conjunction with ground troops as well as other security agencies have continued to yield the expected outcome.

The strikes were believed to have led to the deaths of key bandits and their cohorts, thus enhancing the security of the locations and citizenry.