Allegations against me by Omotola unfounded – Lagos AG Onigbanjo reacts 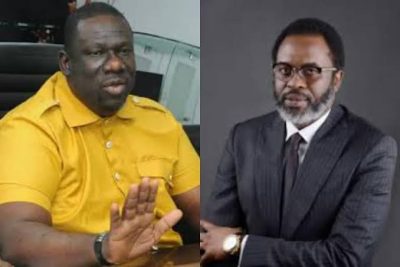 The Lagos State Attorney General and Commissioner for Justice, Moyosore Onigbanjo has reacted to allegations against him by property mogul, Lai Omotola against him, saying they are unfounded.

Omotola, who is the Group Managing Director/CEO, Master Reality International Concepts Limited had on Monday, June 13 accused Onigbanjo of using forged police documents to file criminal charge against him in court.

Omotola tendered a document from the Inspector General of Police where it was discovered that the documents used in filing criminal charge against him at the High Court of Lagos were allegedly forged.

Responding to the allegations, Onigbanjo, in a statement on Tuesday said his attention had been drawn to several online publications, in which he was accused of using forged police documents to file charges against Omotola.

“The reports revealed that one Mr. Lai Omotola at a press conference held on Monday June 13 2022, stated that the Attorney General & Commissioner for Justice Lagos State collaborated with the Police to forge and relied on forged documents to initiate criminal proceedings against him at the High Court of Lagos State.

“The allegations are unfounded, false and a calculated attempt to manipulate and evade prosecution,” he alleged.

“By subsequent petition on the same land dated 28/9/19, the petitioners alleged that Mr. Lai Omotola of Master Reality International Concepts Ltd and Mr. Fatai Okesiji were the ones who illegally grabbed their land.

“After investigating the allegations contained in the above petitions, the Task Force found merit in the petition and restored the petitioner (Estate of Moshood Aremu Olatokunbo) into possession having discovered that Mr. Lai Omotola and Mr. Fatai Okesiji forcefully took over possession of the land contrary to the provisions of the Lagos State Property Protection Law, 2016.

“Having been dispossessed of a land which did not belong to him, Mr Lai Omotola proceeded to make verbal accusations of corruption against the Coordinator of the Task Force (Mr Arole). Mr Omotola was then informed through his lawyer to put his accusations in writing to enable investigation.

“On 2/02/20 and 19/02/20, Mr Lai Omotola petitioned the Hon. Attorney General’s Office and a Committee was set up to look into the issues. The Committee invited Mr. Lai Omotola and the official accused, to testify before it. At the end of its deliberations, the Committee came to the conclusion that Mr. Lai Omotola could not substantiate his allegations of corruption against the Coordinator of the Task Force. Contrary to Mr Omotola’s allegation that the outcome of the Committee’s decision was not made available to him, the outcome was communicated to him by a letter dated 21/02/22 which was received in his office on 28/02/22,” he said.

Onigbanjo alleged that still dissatisfied with this outcome, Omotola proceeded to start harassing and intimidating the Coordinator of the Task Force with all sorts of frivolous petitions, as a result of which the Coordinator was dragged before Zone 2 Police Command, EFCC and IGP’s Monitoring Team, Abuja.

According to him, upon conclusion of investigations based on petition and cross-petition received by Zone 2 Police Command, from Omotola and Estate of Olatokunbo, the duplicate casefile was forwarded to the Directorate of Public Prosecutions (DPP) for issuance of Legal Advice.

“Based on the foregoing the DPP’s office filed a four Count charge against Mr. Lai Omotola. A letter dated 8/07/21 from the law firm of Lukman Iman & Co (solicitors to Mr. Lai Omotola) acknowledged that the charge sheet was served on Mr. Omotola contrary to the allegations of non-service of the charge sheet on him during his press conference.

“The matter came up at the High Court of Lagos State for the first time on 22/3/21, but Mr. Omotola was absent. Owing to his absence in Court on that day, the Court issued a bench warrant for his arrest. However, the bench warrant was revoked on the 25/10/21 when Mr. Omotola appeared in court accompanied by his lawyer.

“On subsequent adjourned dates, Mr. Omotola failed to appear before the Court and was absent on 9 occasions before the Court issued another bench warrant on 8/06/22, directing the police to arrest him and produce him before the court to answer the charges against him. On all these occasions, Mr. Omotola’s lawyers were in Court,” he said.

Reacting to the allegations by Onigbanjo, Omotola said he should address the report from the IGP’s office in which it was discovered that the documents used in filing criminal case against him was forged.

He said they should direct their anger at the police and respond appropriately to the issues raised by the IGP.

In the certified true copy from the IGP’s office, signed by ACP Ibrahim Musa, Head, IGP Monitoring Unit, Nigeria Police Force, Force Headquarters, Abuja, the Force Headquarters said “Given the circumstances surrounding this case and findings, it is obvious that Zone 2, Onikan, Lagos conducted a shoddy and lopsided investigation of the case initially reported by the complainant against CSP Yinka Egbeyemi and Mr. Owolabi Arole, the Head of Lagos State Taskforce on Land Grabbing who supervised the demolishing of the structures erected by the complainant and made a newspaper publication to that effect on Monday 27th, January, 2020 in Punch Newspaper.

“The suspect’s refusal to report at Zone 2 to respond to the allegations reported by the complainant and the discontinuing of investigation of the case by police to a logical conclusion without reasonable cause suggest that the investigation was inconclusive.

“In the interest of fairness and justice, the charge filed at High Court of Lagos State against the complainant be withdrawn by Zone 2 and the entire case be re-assigned to Force Criminal Investigation Department (FCID) for thorough and comprehensive investigation of the case of malicious damage, threat to life and conduct likely to cause breach of public peace as reported by the complainant while the police should stay away from the dispute of ownership of land which is civil and already pending before a court of competent jurisdiction.”