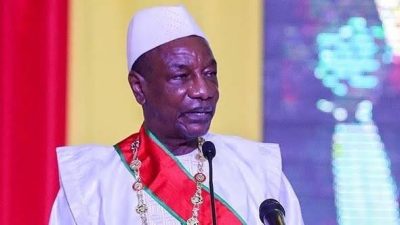 Guinea’s former president Alpha Conde has been freed from house arrest more than seven months after he was ousted in a military coup, the interim government said on state television on Friday.

Conde, 84, had been detained since last September, when special forces troops overthrew him on allegations of fostering endemic state corruption.

Guinea’s new junta government has permitted Conde to receive visitors, and earlier this month allowed him to travel to the United Arab Emirates for a medical check up. read more

He will continue to reside at his wife’s family home in a suburb of the capital Conakry until renovations on his own home are completed, the interim government said in a statement.

Conde’s overthrow was widely condemned by Guinea’s allies, and led to its suspension from the African Union and the Economic Community of West African States.

The 15-nation bloc sanctioned Guinea’s junta leaders and has set an April 25 deadline for them to present a timeline for a return to constitutional rule.

How Alaafin predicted his death and faced it boldly