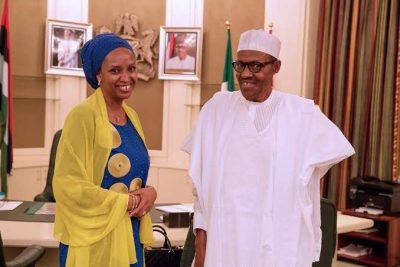 Presidency sources revealed that the committee set up to probe the suspended MD found nothing against her.

It was gathered that the Minister of Transportation, Mr Rotimi Amaechi who recommended her suspension has been fighting hard to stop her reinstatement.

The source said, “Buhari is to reinstate Hadiza of NPA barring any last minute changes. The Committee probing found nothing against her and Amaechi has been fighting hard to ensure she is not reinstated.”

The embattled NPA Boss was suspended in May last year by President Muhammadu Buhari, following a request by Amaechi to raise an Administrative Panel of Inquiry to investigate the Management of the NPA.

Amaechi had raised the alarm through a letter to the President that she failed to remit the aun of N165.32bn between 2016 when she assumed office to the point of her removal.

Usman was suspended as part of moves to allow independent audit of the accounts and remittance of the agency.

According to details of a letter sent to Buhari by Amaechi, the yearly remittance of operating surpluses by the NPA from 2016 to 2020 was “far short of the amount due for actual remittance.”

In the letter, dated March 4, 2021, Amaechi had claimed that within the stipulated years, the NPA recorded an outstanding unremitted balance of N165.32bn and suggested that the financial account of the NPA be investigated and audited.

Following the Minister’s letter, an 11-member committee was set up on May 11 last year to investigate the activities of the Nigerian Ports Authority.

Amaechi, while inaugurating the committee in Abuja, charged the members to be diligent and ensure they do a thorough job.

The committee’s terms of reference, he said, include examining and investigating the administrative policies and strategies adopted by NPA’s Managing Director, Hadiza Usman, and confirm compliance with extant laws and rules from 2016 till date.

Other terms of reference of the panel are to ”Examine and investigate issues leading to the termination of other contracts of NPA and confirm compliance with the terms of the respective contracts, court ruling and presidential directives.

“Examine and investigate compliance with communication channel, as obtained in the public service.

“Examine and investigate the procurement of contracts from 2016 to date.

“Come up with suggestions and advice that would strengthen the operations of NPA and forestall such occurrences in future.

“And any other matter that may be necessary in the course of the assignment.”

In her defence to the President, the embattled MD had said that within a four year period covering 2017 and 2020, the Nigeria Ports Authority under her leadership remitted the sum of N159.11bn into the Consolidated Revenue Fund Account of the Federal Government.

She said this in her letter dated May 5,2021 referenced MD/27/MF/VOL. XX/541 titled: “Re: Request for the record of remittance of operating surpluses to the consolidated revenue funds account, CFR by the NPA.”

She further noted in the letter that the remittances for 2019 and 2020 were tentative as they were based on the completed 2019 audit of the agency’s financial statement which was awaiting the consideration of the NPA board.

She stated that it was at the point of the board’s approval that the final figures for the 2019 operating surplus will be determined for consequent computation of the amount due for remittance to the CRF.

She had explained that the 2017 and 2018 NPA audited financial statements provided operating surpluses of N76.782bn and N71.480bn respectively contrary to the sums of N133.084bn and N88.79bn being speculated.

Usman had stated further that in line with the template issued by the Fiscal Responsibility Commission, the accessible operating surplus of the Authority stood at N51.09bn and N42.51bn for 2017 and 2018 respectively.

“Accordingly, the Authority consequently made a remittance of N42.415bn and N33.969bn for the years 2017 and 2018 respectively for the full amount required as remittance for the period.

“But thus far, the Authority has made a remittance of N31.683bn for the 2019 remittance while the sum of N51.049bn has also thus far been remitted for 2020 while awaiting the audited financial statement to determine the final amount required for both 2019 and 2020 at which point the Authority will make the payment of the balance as required.”

The suspended NPA Boss alluded to the letter conveying the President’s approval for the Ministry of Transport to conduct an audit of the accounts of the NPA and its remittances to the Consolidated Revenue Fund, adding that the figures provided by the Budget Office of the Federation as the operating surplus for the respective years on which basis they arrived at the shortfall was flawed.

She said the figures were derived from submission of budgetary provision and not the actual amounts derived following the statutory audit of the Authority’s financial statements.

“We wish to state that the Authority’s basis for arriving at the operating surplus in which basis the amount due for remittance to the CRF’s guided by the Fiscal Responsibility Act 2007 as amended and further based on the statutory mandate Part 1, S. 3(1) (b) & (d) whereby the Fiscal Responsibility Commission issued a template fir the computation of operating surplus for the purpose of calculating amount due for remittance to the CRF.

“Accordingly, the figures so provided by the Budget Office of the Federation as the operating surplus for the respective years on which basis they arrived at the shortfall are derived from submission of budgetary provision not the actual amounts derived following the statutory audit if the Authority’s financial statements.”

Furthermore, she clarified in the letter that the Authority’s computation of its remittances to the CRF were concluded arising from numbers from audited financial statements using the template forwarded to the Authority by the Fiscal Responsibility Commission.

She requested the Chief of Staff to ask the Office of the Accountant General of the Federation who is the statutory custodian of status of payment to the CRF to provide clarifications on the remittance so as to establish the true position of the Authority’s remittances to the CRF.