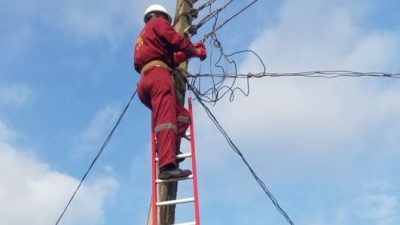 The electricity workers’ union in Abuja Electricity Distribution Company (AEDC) have demanded an unreserved apology from the Economic and Financial Crimes Commission (EFCC) over the alleged assault on its staff.

The associations, Senior Staff Association of Electricity and Allied Companies (SSAEAC) and National Union of Electricity Employees (NUEE), in a joint statement issued on Monday, said the EFCC operatives “unlawfully invaded” the AEDC headquarters on June 6 before carrying out the act.

They demanded compensation for the affected AEDC staff, repair of damaged AEDC properties by EFCC operatives, an end to EFCC’s impunity against any law-abiding citizen and the delisting of its profiled members from EFCC’s database.

The unions issued a “7days ultimatum to EFCC on these demands so that this ugly incident never re-occurs, else power supply to FCT and environs will be shut down to press home our demands”.

“The EFCC operatives got to the gate and forced their way into the premises. They were not sure of the office they were going to carry out their operation. Their aim of the operation was not disclosed and without proper identification nor warrant of arrest on any staff of the company,” the statement reads.

“The operatives assaulted members of staff and exhibited gross act of high-handedness and forcefully bundled 12 of our members who attempted to ask what the matter was. “They took them away to their custody.”

AEDC alleged the operatives of EFCC broke into its offices, tear-gassed and battered so many of its members and broke office doors.

“A particular staff, a lawyer, was beaten up until he became unconscious for asking them for identification. Suddenly, EFCC discovered they were in the wrong place, wrong location and wrong address,” the associations added.

“The rightful address of operation supposed to be Federal Ministry of Power where the nomenclature of DFA exists.”

Among those detained by EFCC operatives, it said were nursing mothers and others with severe health challenges — including the company’s director, legal services — who intervened to enquire about the situation.

“The Director of legal was equally arrested. To our knowledge, there has never been any verbal or written invitation prior to this reckless operation on any matter,” it said.

“The Unions reliably gathered that EFCC tortured our members before they were detained for 3 days. Also, they were individually lured to the restroom and beaten, pepper-sprayed and tear-gassed like common criminals by EFCC operatives.

“Among those that tortured our members are Jamila Ahmed and Mr Femi. A metallic stapler was also used to strike their heads and slapped randomly by these operatives.

“Our staff were profiled, paraded, tagged, and their photograph taken like common criminals before being detained in their cell.”

Furthermore, the two in-house unions acknowledged the positive contributions of EFCC’s fight against economic and financial crime in the country, saying it was undermining the commission’s effort.

“However, this singular act is not only thuggery but highly unprofessional. As at the time of this press release, they have not shown any sign of remorse nor tendered an apology for their unprofessional conduct, rather, AEDC management was coerced to issue a press statement of settlement as a condition for the release of the wrongly detained staff,” it said.

Further inquiring about the incident, the unions demanded to know if there were no rules of engagement in the EFCC operational act and code of conduct and if the operatives of EFCC were above the law. (The Cable)