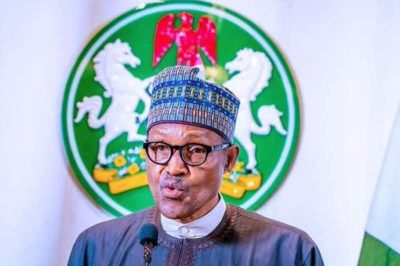 President Muhammadu Buhari has appealed to international partners to declare the Indigenous People of Biafra (IPOB) a terrorist organisation.

The president, in an interview with Bloomberg, said in 2015, Boko Haram held territory the size of Belgium within the borders of Nigeria.

“Today they are close to extinct as a military force. The leader of ISWAP was eliminated by a Nigerian Airforce airstrike in March.

“The jets acquired from the US and intelligence shared by British were not provided to previous administrations and stand as testament to renewed trust re-built between Nigeria and our traditional western allies under my government.

“We urge those same international partners to take additional steps costing them nothing, by proscribing another group – IPOB – as a terrorist organization.

“Their leadership enjoys safe haven in the West, broadcasting hate speech into Nigeria from London, spending millions lobbying members of the US Congress, and freely using international financial networks to arm agitators on the ground. This must stop,” he said.

Buhari stated that his administration was the only one in Nigeria’s history to implement a solution to decades-long herder-farmer conflicts, exacerbated by desertification and demographic growth.

“The National Livestock Transformation Plan, putting ranching at its core, is the only way to deplete the competition for resources at the core of the clashes. Governors from some individual states have sought to play politics where ranches have been established; but where they have been disputes have dramatically reduced,” he said.

Drama as NDLEA storms court with 45 bags of Indian hemp