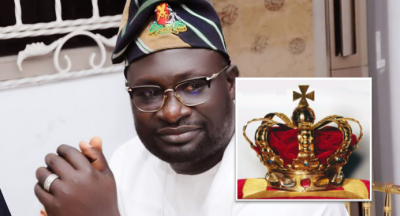 The disgraced Ayiri Emami was on Wednesday arraigned in court for alleged invasion and stealing of Olu of Warri crown valued at over N2billion.

Ayiri Emami who was dethroned as Ologbotsere of Warri Kingdom was arraigned by the Police before a Warri South Chief Magistrates’ Court in Delta State.

In the case with reference No: CR630/2021, the embattled Ayiri, a renowned billionaire businessman, was slammed with three counts bordering on conspiracy, burglary and stealing.

When the prosecutor read the charges to him, Emami pleaded not guilty.

ENigeria Newspaper reports that in the charges prepared by the police, Emami allegedly conspired with others now at large to break into the palace of the Olu of Warri to steal two royal crowns valued at N2bn, being property of the Itsekiri Kingdom.

Emami and his accomplices allegedly committed the offence on March 30, 2021 around 11.30pm.
Mr. Emmanuel Uti, the accused’s lead counsel, requested the court to grant bail to his client, stressing that he was eager and ready to appear in court at any moment.

SP Sunday Irabor, the police prosecutor, noted that the court has the option to give release, but he advocated for strict bail conditions and solid sureties.

During the hearings, Mr. Fabius Atie represented the Olu of Warri Palace.

“The sureties must be at Grade Level 15 in the civil service; they must provide their passports and body photographs as well as national means of identification,” the chief magistrate ruled.

The case was then adjourned till January 19, 2022 for further hearing.

Speaking to journalists shortly after the court session, Emami blamed some prominent Itsekiri chiefs for his travail.

ENigeria Newspaper reports that he alleged that his arraignment would not stop him from pursuing cases he had instituted in various courts challenging the selection and emergence of Ogiame Atuwatse lll as the Olu of Warri.

Adding that he would pursue the cases to a logical conclusion to clear his name in the case of invasion of the palace and theft of the royal crowns.

Buhari Has Done More For Igbos Than All PDP Governments – Actor, Kenneth Okonkwo