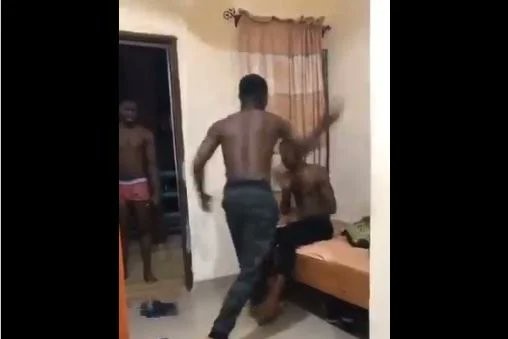 A video showing a 100-level student of Babcock University assaulting his colleague has surfaced and gone viral on social media.

The short video, which surfaced online on Wednesday, shows one of the two students shielding himself as his assailant delivers repeated slaps and punches in an environment that appears to be a hostel.

The visibly raging student had started by lifting and throwing his subject from the bed to the tiled floor. He went ahead to warn him never to put on his slippers again.

None of the other students who witnessed the assault attempted to quell the dispute in the footage, including the individual who filmed the fight.

Babcock student beats a younger student because of slippers!! What is that school turning into? This keeps happening, sigh🤦 pic.twitter.com/1m3lqZJcQ5

In 2019, Babcock had condemned the activities of one of its ex-students whose sex tape leaked while also expelling his girlfriend with whom the video was filmed.

“The video is unfortunately, a sad commentary on the moral decadence that has assailed our society at large, a manner of behaviour that is alien and antithetical to the value of our university,” the varsity had said.

“The boy in the video was expelled from Babcock University in February this year (2019) after investigation and the due process proved that he was into certain grievous misconducts, the acts for which the university has zero-tolerance.

“His girlfriend in the same video, until the video broke out, a third-year student of accounting of this university. After due process, she was expelled from the university for violation of university rules and regulations.” (The Cabel Lifestyle)

FG approves establishment of SIM swap centres in all 774 LGAs