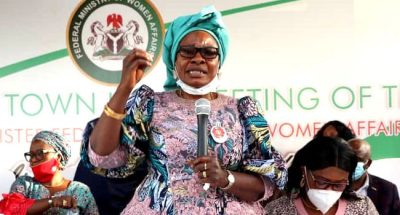 The Child Rights Act, which addresses issues including child abuse, child labour, forced marriage, and other challenges in Nigeria, has now been domesticated by 34 of the 36 states that make up the federation, Minister of Women Affairs Pauline Tallen has disclosed.

She said the remaining two states which she refused to mention have given assurances that the Act will be domesticated in their states before the year runs out.

The proposed law named “The Violence Against Persons Prohibition Act (2015)” had been domesticated by just 13 states as of 2019, raising concerns in government and child rights circles.

“With the Child’s right Act, the girl child is guaranteed to be in school up to senior secondary school, minimum when she will be about 17-18 years and by then, she would have crossed the early marriage stage,” she added.

Tallen who appeared at the 59th edition of the Ministerial Media Briefing organized by the Presidential Communications Team at the Presidential Villa Abuja on Thursday, Minister of Women Affairs, said the outcome is a result of active advocacy to ensure that all states key into the initiative.

The Minister said she had personally met with key stakeholders and speakers of State Houses of Assembly to stress the need for them to pass the bill into law for their governors to assent to.

She also noted the leadership of President Muhammadu Buhari provided in the effort to have all states domesticate the act, complemented by the First Lady, Aisha Buhari and the Forum of First Ladies.

The Minister said cases of Gender Base Violence is on the increase daily and urged men to join the fight against the scorch, saying it was the reason the UN system instituted the He4She slogan and decorated Nigerian leaders including President Muhammadu Buhari and Vice President, Yemi Osinbajo, who believe without women they cannot get it right.

“As I said the world is now taking the face of a woman and is addressing gender balance. Without having more women at the decision table, we can never get it right. Once we have women the difference will be clear because mnn cannot know it all and that was why woman was created by God. So ignoring women is going against the will of God.”

“We have a total of 11, 053 cases of gender-based violence reported, fatal cases, 401, closed cases, 592, very sad and we had only 33 persons convicted for this deadly act and that is unacceptable and that is why we are calling on the justice system to act fast on cases of gender-based violence because justice delayed is justice denied,” Tallen stated.

The minister also disclosed that under Nigeria for Women Project, supported by World Bank over N3 billion has been disbursed to 67,358 women beneficiaries.

She added that A total number of 6,142 beneficiaries from the 8 pilot States have profited from the disbursement of the National Women Empowerment Fund (NAWEF), a micro-credit intervention Fund to provide loans up to N100,000.00 to women in collaboration with the Bank of Industry.

The Minister, who emphasized that girl child education is key in all societies, used the occasion to call on parents to ensure that they train their girls to at least secondary school level before giving them out for marriage.

“The education of the girl child is key to the ministry without education, you can’t get it right. Education is top on our agenda and that is why we work hand in hand with the Ministry of Education because that is what will equip the woman for life.

“Without education, we will not have women representing us at the international level. Without that, Amina Mohammed wouldn’t have been there making us proud at the UN, likewise, Ngozi Okonlo-Iwealah would not have been at the World Trade Organization.

“I’m happy because the President of Nigeria, Muhammadu Buhari has insisted that every Nigerian child deserves to be educated especially the girl child. When you educate a woman, you educate the family and society at large but when you educate a man, you are educating a single person,” she said.