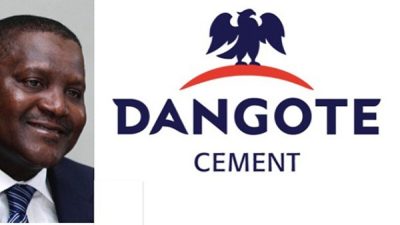 Investors angling to buy shares of Dangote Cement are using highest possible daily premium to entice sellers as scramble for the shares of the cement group continues.

The Nation had on Monday reported that Dangote Cement plans to buy back not less than 10 per cent of its issued share capital, in a transaction valued at more than N406 billion.

Since the report, Dangote Cement has sustained a chart-leading rally at the stock market, notching in most trades the highest possible gain in a day.

At the Nigerian stock market, share prices move within a daily band of 10 per cent, implying that a stock may fall or rise as high as 10 per cent.

Dangote Cement recorded the highest gain of 10 per cent yesterday at the Nigerian Exchange (NGX), equivalent to net capital gain of N405.6 billion for the stock.

Dangote Cement’s share price rose by N23.80 to close at N262.30 per share. The company’s market capitalisation thus rose from its opening value of N4.064 trillion to close yesterday at N4.470 trillion.

Dangote Cement had  filed a regulatory notice that it would be seeking to buy back some 1.704 billion shares from its existing 17.04 billion ordinary shares under the share buyback arrangement that may see the company directly mopping up its shares at the stock market.

The Aliko Dangote-led board of directors of Dangote Cement has already summoned an extraordinary general meeting of shareholders to consider and approve the share buyback.

The company stated that the share buyback was in line with its corporate strategy, an indirect way to increase return on equity and shareholder value.

In a regulatory filing, the company explained that the shares will be repurchased out of its profit and such repurchased shares may be held as treasury shares or cancelled, thus leading to reduction in the share capital.

Dangote Cement is sub-Saharan Africa’s largest cement producer with an installed capacity of 45.6 metric tonnes per annum across 10 African countries. It operates a fully integrated “quarry-to-customer” business with activities covering manufacturing, sales, and distribution of cement.

Dangote Cement has a long-term credit rating of AA+ by GCR and Aa2.ng by Moody’s due to its position, significant operational scale and strong financial profile evidenced by the company’s operating and net profit margins relative to regional and global peers, adequate working capital, satisfactory cash flow and low leverage.