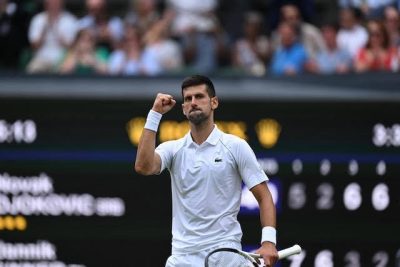 Novak Djokovic equalled former coach Andre Agassi’s record with his 26th consecutive win at the Australian Open on Wednesday, advancing to the semi-finals.

The nine-time champion was in fine form again, consistently painting the lines in a 6-1, 6-2, 6-4 win over fifth seed Andrey Rublev on Rod Laver Arena.

It paved the way for a match against unseeded American Tommy Paul.

Djokovic hasn’t lost at Melbourne Park since 2018, and he has a 39-match winning streak in Australia. This now matches Agassi’s win streak from 2000 to 2004.

“I cannot be happier with my tennis. I’ve been playing very solid. I love playing in these conditions, on this court. Overall I think the scoreline in the first two sets doesn’t speak the truth of the match.

“Andrey is a great player. I found my best tennis in all of the crucial moments and shots. So, that’s what I’m most pleased about tonight.”

The fifth seed appeared to be bothered by his left hamstring at times.

But it didn’t stop him from running around the court, deflecting everything big-hitting Russian Rublev threw at him. He was more affected by a heckler who called out “Come on Andrey, send him home” during the first set.

It drew loud boos from the largely pro-Djokovic crowd and prompted the Serbian to complain to British umpire James Keothavong.

It was Rublev’s turn to appeal to Keothavong in the second set when he felt Djokovic should have received a time violation.

However, the man on the other end of the court frustrated the Russian, who was attempting to reach his first grand slam semi-final on the seventh attempt.

Djokovic, who has never lost in the Melbourne Park semi-finals, was nearly flawless in the big moments.

He avoided all five break points he faced and won in two hours and three minutes.