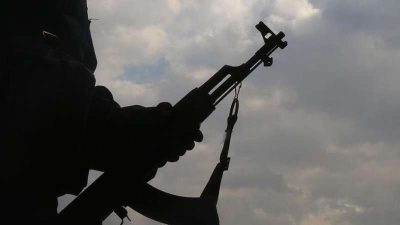 Gunmen last Sunday shot dead and then beheaded a man said to be a member of the Ebubeagu security operative in Ebonyi State, Nigeria’s Southeast.

Ebubeagu was set up by the Ebonyi State Government to complement the job of the police and other security agencies in checking the rising crime rates in the state.

The incident occurred in Ekpelu, in Ikwo Local Government Area of the state, while the slain man has been identified as Sunday Nwafor, 30.

The gunmen, over five of them, were said to have stormed the man’s house at night while he was asleep and shot him dead. They dragged the body out of the room, cut off his head and took it away.

The police spokesperson in Ebonyi, Loveth Odah, confirmed the incident.

She said two suspects have been arrested over the killing.

“According to the wife who spoke to policemen, she said that before she heard a gunshot, she over-heard one of the hoodlums telling her husband that he left them in the bush and came back home to enjoy himself by collecting N30,000 from the government,” the police spokesperson said.

“This is barbaric,” she said.

Ms Odah said the commissioner of police in the state has ordered an investigation into the incident and has vowed to bring to justice those responsible for it.

Gunmen, in a similar manner, earlier this month killed a member of the Ebubeagu in Ebonyi and set ablaze his remains.

Meanwhile, the police in Ebonyi State said they are investigating the torture and killing of a man identified as Akpoke Anyim in Ivo Local Government Area of the state.

A clip of the incident is being circulated on Facebook and other social media platforms.

The clip showed Mr Anyim’s hands being tied in the back, while some men, said to be members of Ebubeagu, were seen hitting him with an axe.

Mr Ayim, accused of serially robbing and sexually molesting women, was said to have later died from the injuries he sustained during the torture.

The police spokesperson, Ms Odah, said some arrests have been made over the incident.

She confirmed that the suspects are members of the Ebubeagu managed by Ivo local council.

“Nobody has a right to take a life, no matter the offence the person committed. The police in totality condemn jungle justice, self-help, the brutality of any kind,” she said.