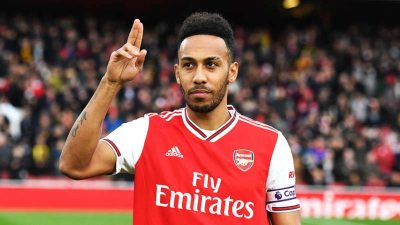 Emmanuel Adebayor has taken aim at his former club Arsenal in response to their treatment of star player Pierre-Emerick Aubameyang.

The writing’s on the wall in regards to Aubameyang’s future at Arsenal. He’s been frozen out of the squad by Mikel Arteta following a number of disciplinary issues.

The Gunners are thought to be keen on offloading their highest-earner at the club, supposedly offering him to the likes of Newcastle United and Paris Saint-Germain.

But the decision to outcast the Gabon striker does NOT sit well with Adebayor, who has slammed Arsenal’s handling of the situation.

He also called Aubameyang a ‘fantastic’ player having revealed that he’s messaged him.

The former Togo international, though, doesn’t think there’s a way back at the Emirates as he reflected on his own time at the club.

“They never knew how to forgive, so I know he went through a lot. He’s a fantastic player, I wish him all the best – I’ve sent him a message already,” he told Sky Sports via Evening Standard.

“We just want him to bounce back. Whether we like it or not, he’s an African brother and we want him to keep representing Africa the way he was doing before.”

Asked if he sees a way back for Aubameyang at Arsenal, he replied: “I don’t think so, this is what I know because it happened to me also.

“Not in the same way but in Arsenal, a way back I would be surprised [to see]. But he’s a great player so let’s see how it ends up.”

Aubameyang, 32, has not played for Arsenal since he was stripped of the captaincy in December.

Before his exile, he had made 15 appearances in all competitions scoring seven goals, including four in the Premier League.