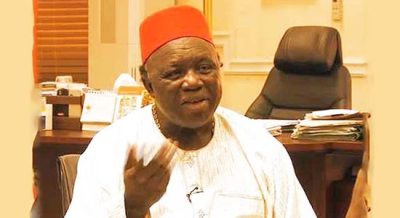 The leadership of Ohanaeze Ndigbo Worldwide led by Ambassador George Obio­zor has urged youths in the South East region of Nigeria to eschew ethnic chauvinism as the 2023 general election draws nearer.

The Ohanaeze admonition is in reaction to a statement issued by Igbo youths under the auspices of the Coalition of South-East Youth Leaders (COSEYL), where the group was quoted by the Guardian Newspaper on August 10, 2022, to have warned groups and individuals promoting the presidential ambition of Senator Ahmed Bola Tinubu to stay clear of the region.

According to the report, the group was said to have described as “unfortunate the action of certain per­sons from Igbo land in allow­ing themselves to be used to promote the ambition of a man who is outdated in all ramifications in the scheme of things as a Nigerian pres­ident come 2023.

A statement on Friday from the socio-political or­ganisation signed by Chie­dozie Alex Ogbonnia, the National Publicity Secretary, stated that it acknowledges the inalienable rights of in­dividuals and groups to ex­press their views on national issues but advises that such rights should not infringe on the rights of other Nigerian citizens.

“Clarification is made that each of the presidential candidates has every right to campaign and canvass for votes in all parts of the coun­try. In other words, since the presidential candidates of the South-East or Igbo ex­traction enjoy untrammelled access and mass followership in other geopolitical zones of the country, it is politi­cal self-immolation and in­deed highly unreflective for COSEYL to embark on a mis­step that may diminish the Igbo patina for inter-ethnic friendliness.

“Emphasis is further drawn that the statement by the COSEYL is at variance with the Igbo character of liberality, hospitality, frontier spirit and accommodation of diverse interests.

“The South-East constitu­ency has sufficient political awareness or enlightenment to assess the presidential candidates as they visit the South-East to market their manifestoes and canvass for votes.

“As we celebrate the In­ternational Youth Day with the theme- of generational solidarity; it is necessary that as leaders of tomorrow, instead of an archaic and implacable adherence to prosaic ethnic indulgences, it is much better to develop an inter-ethnic solidarity with an encompassing na­tional ideology into which the productive energies of the youths from diverse parts of the country will coalesce,” Ohanaeze stated.